Fly Me To The Moon

So, where were you when Neil Armstrong stepped out onto the moon?

As far as I recall - and yes, I was alive at the time, hard to believe in one so fresh faced and lovely - I was in bed. I remember scrambling out for the re-runs at 6.00 a.m. and spending the rest of the day at school trying to keep my eyes open.

I also spent the next few days buying up all the newspapers, in training to be a geek before the word was invented. I then filed them all away in an old suitcase (in a bid to be an early nerd as well). And during all the Apollo frenzy last week, a trip into the loft revealed … taraa, they’re all still there! So the last week has been a complete lunar nostalgia fest. And as I re-read all those old papers, I experienced again that old feeling of guilt about not doing my homework.

Whilst it’s possible to recapture some of the excitement of the period (readers under 48 need not apply), it is, of course, impossible to get a feeling of what it would really be like to stand upon the surface of the moon. Probably the nearest most of us will get is to look at the cleaned up, archived photographs in the book, Full Moon. Or go and look at the paintings by Alan Bean. That’s right, one of the moon walkers. He was the 4th person to walk on the moon, in November 1969. When he came back home, realised how lucky we were to live on Earth and was inspired to take up painting.

No cartoonists have yet made it to the moon (I am open to offers). It’s probably just as well. You may be aware there are people out there who doubt the moon landings were real and think it’s all an elaborate conspiracy. Designed, I presume, to give them a vapid and tawdry career spouting cobblers on TV. A cartoonist couldn’t resist messing with their heads by scratching out in the lunar dust: “IT’S ALL FAKE!”

Incidentally, drawing cartoons on the moon is now entirely feasible. NASA’s new LRO has already sent back pictures of the Apollo landing sites, showing the Lunar Module and the path made by Aldrin and Armstrong. Let me repeat, there is one cartoonist not a quarter of a million miles from where I sit who would go in a heartbeat. (Although a spaceship would be more useful.)

Was Apollo worth it? The lunar landing programme cost $150 billion in today’s money. That seems an awful lot until you discover that bailing out the American banking system has just cost the American tax payer $700 billion. Which of those two achievements is the most uplifting and inspirational?

On the other hand, spending $700,000,000,000 to send the world’s bankers to the moon seems a fantastically reasonable deal. We could even save some money: Don’t bother to give them space suits. 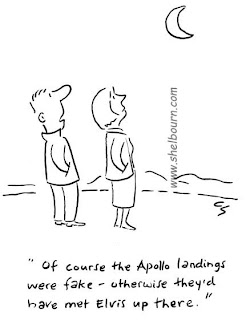 Posted by Colin Shelbourn at 21:45 No comments:

Having decided that the BBC licence tax is going to get me whether or not I have a television, I’ve succumbed to a digibox. And now the second stage of the demented switch over process is complete, and analogue has been switched off, I have:

(A) About a million new channels

(B) A television with a pile of redundant analogue electronics inside it. Yes, I know I am supposed to ditch it and get a flat screen thing but I like my old Sony, so there. The economy can recover from recession without my input.

Acquiring all the digital radio stations, including the wonderful Radio 7 and BBC-BBC World Service, is a considerable bonus. I am not so sure the same can be said for some of the TV channels. For those of you who haven’t switched yet, here’s what you have in store:

BBC1 to 4 - not quite sure why the BBC needs so many or why 3 and 4 require a little logo in the top left to tell you what you’ve tuned into. Are goldfish the BBC's new core demographic?

BBC News - 24 hour news with presenters who aren’t handsome or pretty enough to be on BBC1.

ITV3 - repeats of programmes you last saw when you were three years old.

Channel 4 - so named because you have a one-in-four chance of getting Big Brother whatever time of day you tune in.

Teacher’s Channel - only on for a few hours a day and then disappears for the summer.

Community Channel - stuff you would otherwise know about if you didn’t spend all day indoors watching TV.

305 - nothing broadcast, which makes it the one place you’re safe from those irritating Michael Winner adverts.

Strangely enough, the likelihood of finding something you want to watch seems to be in inverse proportion to the number of channels on offer. Other channels may, of course, be available but after going through that lot, it’s easy to find yourself being drawn to the bookcase …

Fortunately, the electronic programme guide is quite exciting. I could watch that for hours.

Posted by Colin Shelbourn at 19:12 No comments:

Which comes first, the caption or the drawing?

Answer: It doesn’t matter, as long as they both arrive at the reader at the same time.

The caption rarely stands up on its own. “I keep thinking it’s Tuesday,” isn’t even mildly amusing until you realise the speaker is a hippo wallowing in a pool. Paul Crum’s Punch cartoon may defy logical analysis but without the drawing, it’s nothing. So what is the point of doing cartoons on the radio?

Weirdness. A desire to be different. Refusal to do what everyone else says you must do. These are all good reasons for becoming a cartoonist. Once you accept that, being told cartoons on the radio won’t work are all the reasons you need.

The radio cartoons appear on CityTalk 105.9’s Sunday breakfast show Rob McLoughlin Live. It all came about because of the sheep connection.

I’ve drawn a number of sheep on postcards over the years. They raid picnics, dance on caravan roofs or drive tanks - all the usual things sheep get up to when there’s no one watching. So when ace radio journalist Caz Graham produced a BBC feature on the little woolly monsters, she asked me to draw one on-air. “Use your loudest pencil,” she suggested, helpfully.

The pencil was recorded and the cartoon went onto the BBC website. Another first ticked off, I thought.

Then along came Mr McLoughlin. Rob used to be a regular presenter on Granada Reports and now hosts ITV Granada’s political discussion show, Party People. His latest venture is a Sunday morning on-air broadsheet and, as we all know, all the best newspapers have a cartoon.

The show goes out between 7.00 and 10.00 a.m (BST). If you think you have an excuse to stay in bed because you aren’t in Liverpool, think again; it is streamed live over the interweb.

During the show Rob and I chat about the news and what ideas I’m producing (if any). Initial sketches go onto radiocartoonist.co.uk and Rob and his studio guests vote on their favourite. The winning cartoon is coloured and online by the end of the show. A deadline which is a tad more stimulating than a Sunday morning fry up.

The next show is 19th July. You can never have enough opportunities to make an idiot of yourself, so this time I’ll be Twittering about it during the course of the show.

The insights offered may not be deep or meaningful but they’re guaranteed to be less than 140 characters long. And I’ll even supply the pictures. 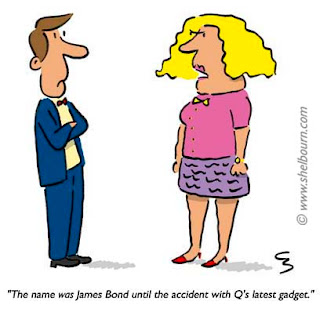 Posted by Colin Shelbourn at 19:24 No comments: