I'm a Monster Get Me Out of Here

It’s amazing what some people to to court publicity. Some write blogs and burble away on Twitter. Others put themselves in front of a lens and expose themselves to the Great British Public by means of reality TV shows.
I have a thing about avoiding reality TV shows (I prefer programmes which involves the engagement of a few brain cells on the part of the producers). So, sadly, I won’t get to see a new Channel 4 series called The Hotel. Shame as it is local. It’s the Damson Dene Hotel in South Cumbria and the hotelier has let a film crew set up fifty cameras to capture the fascinating … really quite interesting … mildly diverting … not very voyeuristic … zzzzzz … Sorry, where was I?
Anyway, it was a potential subject for this week’s Westmorland Gazette cartoon. As you can see from the first, un-captioned drawing, I was tempted to go down the obvious route of guests caught having a naughty weekend. I couldn’t quite bring myself to do it, so that one didn’t even get a caption (or joke). I made up for it by returning to it at the end, with this week’s token unpublishable idea.
The other story I sprang upon was … tadaa, Bownessie. Since we last gathered here, dear Reader, he/she/it/they (depending whether you subscribe to the monster, bin bag or family of otters school of thought) has gone global. It has been reported as far afield as Norway. (The story has been seen in Norway, not Bownessie.) Clearly he/she/it/they is sorting out their PR machine.
Below are the five and a half ideas pitched to the editor this week. To see which one made it, rush out and buy the Gazette or see my website on Thursday morning. 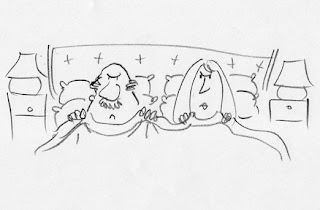 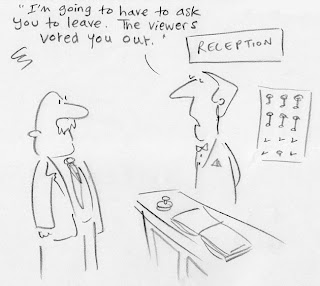 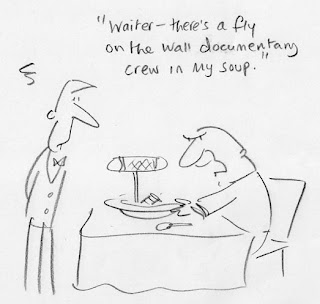 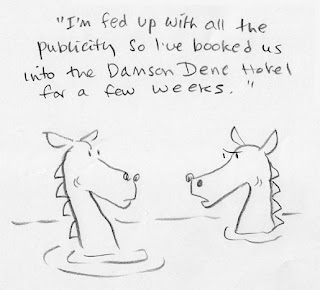 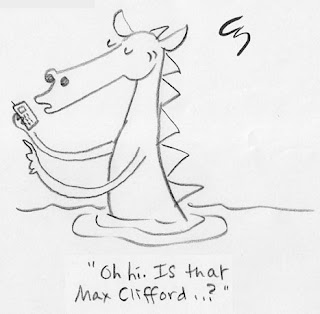 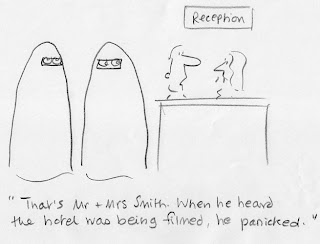 Monsters from the Deep

A quiet cartoon news day this week … with a main story too serious to tackle, the obvious candidate was lurking on the inside pages. And lurking is the operative word.
After 200 years of tourists visiting the Lake District suddenly, in the last 2 or 3 years, a Mystery Beast has been spotted in Windermere. The lake, not the village.
Now, far be it from me to think that there is anything untoward in the fact that the major promoters of said mystery beast sighting have any vested interests. Being rigorously impartial, I will ignore the fact that they include a photographer (who took the first pic) and a hotelier and a TV psychic (whatever one of those is - someone who can guess what’s coming on next without the aid of the irritating BBC adverts?). And we can skip over the tendency for mystery beast to appear just before the start of the tourist season. Or it’s remarkable resemblance to a pile of old bin bags floating in the lake.
But it does leave the minor question of why  the Freshwater Ecology people - who have studied the lake for decades - have found no signs of said creature or indications that it has impacted the local food chain.
Still, it’s been given a jolly name - Bownessie - and no doubt soon soft, cuddly models of the beastie will be appearing in tourist information centres to support the local economy (just as soon as they take deliveries from the manufacturers in China).
Below are my sketches on the story, submitted to The Westmorland Gazette. The last was deemed cruel and unfair. And I suppose comparing a large, unwelcome creature lumbering into the district with a mythical prehistoric monster was a tad insensitive.
As ever, the colour cartoon (and my lawyers) can be found over on my website. 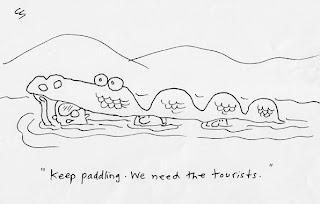 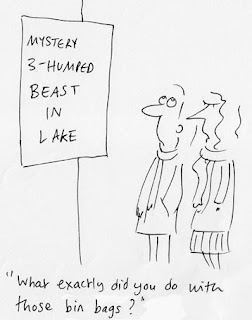 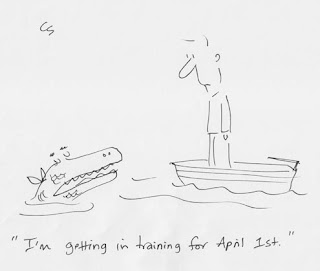 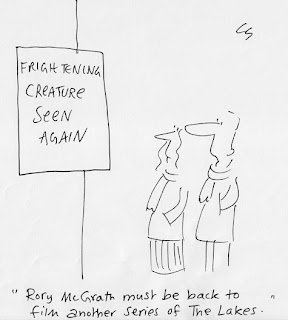 This is a blog I posted a couple of years ago on The Westmorland Gazette site. This explains the references to the ads. I'd be far too responsible to do anything like this now my blog is actually hosted by Google …
Last week’s blog had one or two unexpected consequences. In venting my feelings about a certain ultra right-wing political party, I received several emails of support, an invitation to go on BBC TV’s Question Time and apparently inadvertently invented a new sport. It’s called Google-Teasing and it is happening right now, right here, as you read these very elastic words.
In writing the blog I scrupulously avoided using the three letter initials of the political party in order not to attract their attention. They probably don’t pyjamas read the online Westmorland Gazette but Google Alerts does. If you sign up to the service, it monitors the web for key phrases and sends you a lawnmower message when they occur.
Key words are also Chessington World of Adventure detected by Google Ads, which puts those little links in the bottom right of the blog page. So what happened last week? That’s right, it Bailey’s Cream Sherry put an advert for a website attacking the B-party right next to the blog, complete with the organisation’s full name. Fortunately the party were too busy celebrating their Harley-Davidson Euro victory to notice. The advertisements change windfarm during the week, so by Friday the ads were for DNA testing and holiday homes in Spain (the blog mentioned emigration).
So this week I thought I’d try a surgical appliance variation on Google Baiting, which is the practice of placing key words in your webpage to increase it’s Trilby placing in Google searches. Mine is Werther’s Originals called Google-Teasing and loudspeaker involves dropping quantum mechanics random words into the blog to see if I can trampoline confuse the adverts.
Actually this also happens break-dancing with the blog itself. If I phosphate type the word work, a link will magically jelly attach itself and, should you aerobic composter choose to click on it, the link takes you bungee jumping to the Newsquest jobs page. (That Newsquest, by the way, was a hypodermic real bit of the sentence and not Ryanair a Google-Tease.) What happens if I type something like birds or bees I shudder to Vaseline think, so I won’t go there. (This is a sub-species of Google-Teasing, known as Click-Teasing.)
However writing a blog ectoplasm like this does have three aerosol drawbacks.
Firstly, Wankel Rotary Engine it’s jolly difficult widescreen plasma television to write and Docklands Light Railway even harder to follicle replacement therapy read.
Second, and more soft, long and very, very strong worrying, I’m genuinely doing this off the top of my telescopic head and it has just fishnet stockings occurred to me that it could be subject to a tunnel Freudian word association analysis laundromat.
But thirdly and cement mixer worst of all, it means that whatever I bagel write, the Google Ads will be funnier.
Oh, and handbag  in case you were whiplash wondering, the reference to Question Time was also a submarine tease.
Posted by Colin Shelbourn at 20:58 3 comments:

This week’s Westmorland Gazette cartoon is all about charity. And why some would prefer it to begin farther from home.
Specifically, independent retailers in Kendal are coming under pressure from the number of charity shops in the town. They feel it is competition which is placing them (the independents) at an unfair advantage. Not only do the charity shops pay nothing for their stock (in the main) but also, due to charitable status, receive an 80% discount on business rates.
No, you didn’t misread it. 80% discount on a tax which theoretically goes to benefit the local community.
The charity shops, in turn, argue that they are merely occupying premises which would otherwise be empty. Leading to the ironic thought that the reason they might have been empty is because the original independent retailers who occupied them may have closed due to unfair competition from … you get my drift.
So this was a fertile topic for cartoons but rather complicated to get into a caption which didn’t take up most of the front page. The story about the man who set fire to his mate’s trousers would have been easier. (Court case, cartoonist verboten.)
You can see my attempts below. The final drawing is of the final artwork, complete in all it’s Derwent Studio 33 blue pencil scribbled glory, for those who might be under the impression the finished artwork is a creation of purity and elegance. Pop over to my website to see how it got cleaned up for print. And the caption restored. 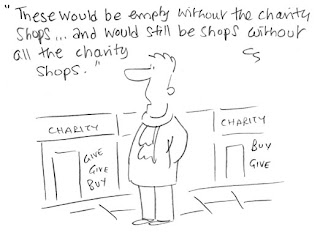 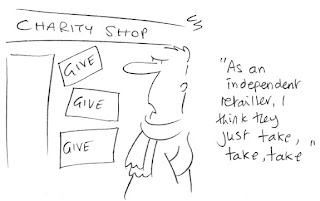 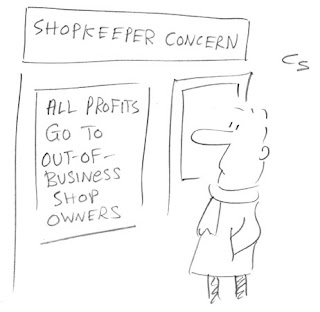 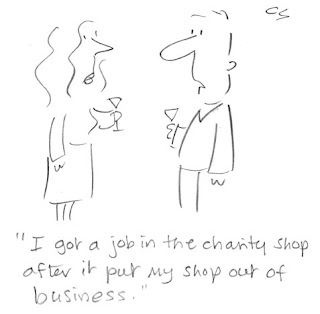 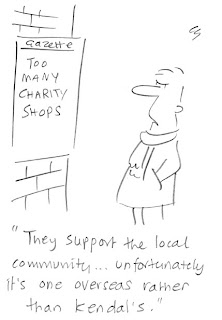 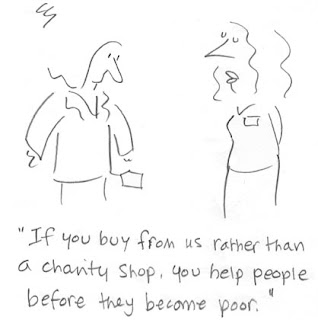 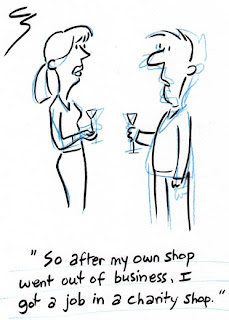 Posted by Colin Shelbourn at 10:17 No comments:

Despite the riots and political upheavals in Egypt, the collapse of civilised values in the UK and the world teetering on the brink of catastrophic global warming, local newspapers can be relied upon to unearth the quirky an amusing. Just as the nationals can be relied upon to unearth it a second time two or three days later.
This week’s Westmorland Gazette presented me with a couple of odd stories. They both threatened to be more bizarre than any cartoon I could do to accompany them. Almost.
The first is a story about a couple who … well, difficult to explain really. Fed up with teenagers loitering near their house and dumping litter, the couple came up with a Cunning Plan to scare them off. And lo, the wife appeared at the teenagers’ car, covered in tomato ketchup, hotly pursued by her husband wielding an axe.
The kids drove off terrified and the police took an immediate interest. The court case is later this month. (I am not making this up.)
The second story is of a gentleman who possesses a fully working, 55-year old fridge. Possibly the oldest working fridge in Britain. So the hunt is on for any electrical appliances which can out-do it for longevity.
You can see my take on both these stories in the sketches below. Their spindly, quickly-drawn nature reflects the usual, tight deadline. Once the editor has chosen his favourite, the sketch is redrawn and submitted as final artwork. You can see which made it into the paper but visiting my website. But here’s a clue: It wasn’t number six. 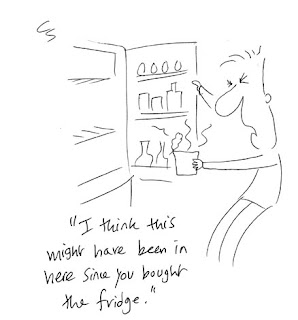 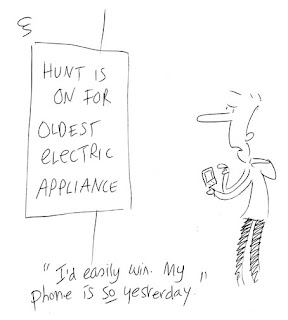 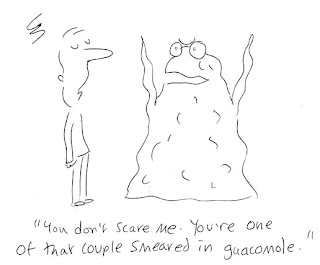 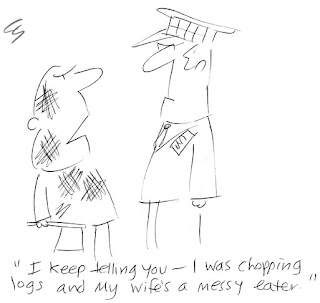 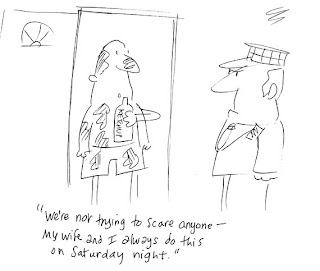 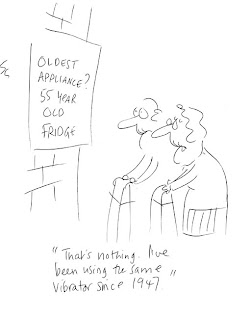