Excitement, thrills, tension, drama … all these things and more were absent from the UK Budget on Wednesday. Following it live from the Commons via streaming video, it was one of those events where the commentary was more interesting than the event itself.
Local MP Tim Farron was tweeting live from the Commons, highlighting aspects which had repercussions for the Cumbria economy. Money expert Jasmine Birtles was giving point by point analysis. It was all far more entertaining than watching Burlington Bertie’s performance at the despatch box. The only thing which caught my attention was the increased tax on private jets. Now how am I supposed to get about? At this rate, it will soon be cheaper to take the train.
I was watching all this whilst working on this week’s Westmorland Gazette cartoon. You can see the effect it was having by casting your eye over this week’s contenders. (I could have done one drawing and four captions this week. But - in answer to the question: which comes first? - doing the drawing usually helps me get the caption straight in my mind.)
In the end, the sketches weren’t all about the budget, although I was amused that one budget story I picked out hadn’t actually got as far as the paper yet. (Proving my claim that it would be much easier if I submitted cartoons and the reporters then wrote stories to fit.)
The other stories included BBC plans to reduce local radio output, a bizarre re-definition of 'affordable housing' based on local house prices, not income and a European ruling that Cumberland Sausage can only be called Cumberland Sausage if it is actually made in Cumberland (which no longer exists).
To see which cartoon has leapt onto the front page, pop over to my website where you can see it in full technicolor. 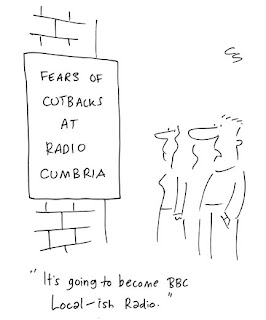 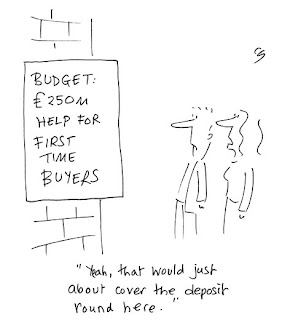 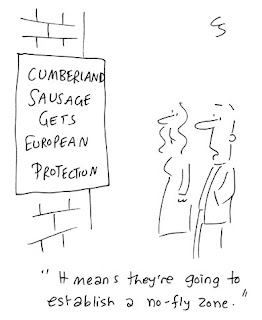 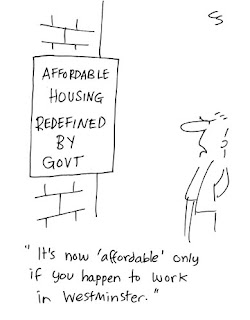 International news featured in the award-winning Westmorland Gazette this week. The leader of the Free World (as opposed to the Paid-For World) is visiting the UK in May and the campaign is on to get him to visit the North West.
More specifically, Warton. This unassuming village (which is neither sleepy nor nestling anywhere, despite being outside the London media circus) has connections with George Washington. Specifically, his ancestors lived there and one of them helped build St Oswald’s Church. The stained glass window has the family coat of arms which, legend has it, inspired the design of the US flag. The villagers still run the US flag up the village flag pole every 4th July.
I’m not sure why Barak Obama should feel particularly impelled to visit someone else’s ancestral home, just because they once held the same job as him. But any excuse to get a state visit.
On the other hand, if the President would like to venture a few miles north, an even more epoch-making connection may be established.
Here are the cartoons I pitched for the paper this week. One of them was clearly doomed not to get in. To find out which of the other three hit the editorial bullseye, pop over to my website at once or rush out and buy the paper. 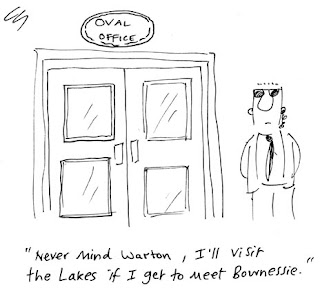 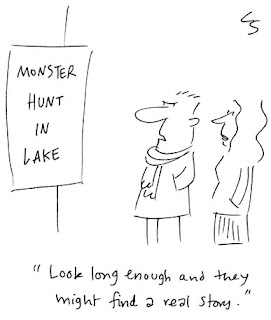 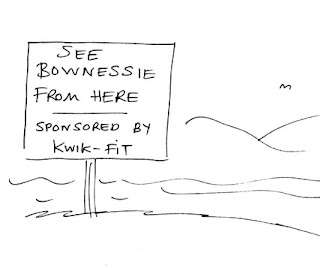 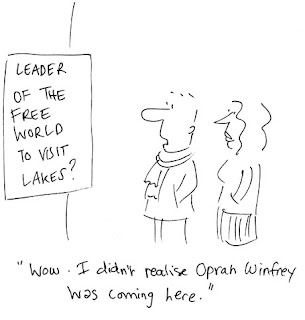 This week’s Westmorland Gazette provided a range of stories for cartoonist examination. Cumbria County Council are making cutbacks to rural bus services, street lights in Windermere have been lit continuously for several months due to an electrical fault, local school children have been consuming vast quantities of alcohol …
Oh, and Bownessie the lake monster has been popping up again. In fact, there were two stories about everyone’s favourite lake monster.
The first of these disputes that it is everyone’s favourite monster. The people at Loch Nessie are getting a tad techy and have issued a statement pointing out that they’ve been faking monsters far longer than we have. And Nessie contributes far more to the economy than Bownessie ever will. And he eats porridge, so there.
In response, the Gazette have compiled a Top Trumps game in which they point out that Bownessie swims faster than Nessie, has been seen more often in recent years, has its own Facebook page and has got four humps not three.
Which leads us to the second Bownessie story in which someone has found an old tyre which, when cut up and thrown in the lake, looks like a four-humped mythical lake creature.
It’s all very exciting and I can’t wait for the next instalment.
Meanwhile, cast your gaze downwards and you can see my sketches on these vital subjects. As usual, the editor’s final choice will appear in the Gazette and on my website on Thursday morning. 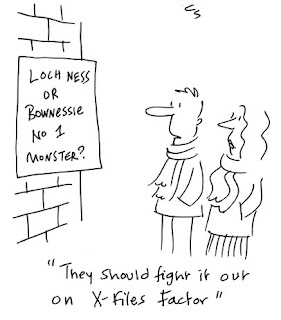 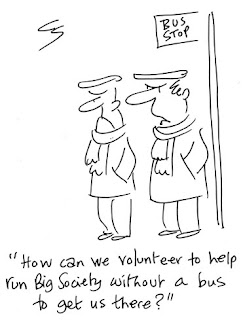 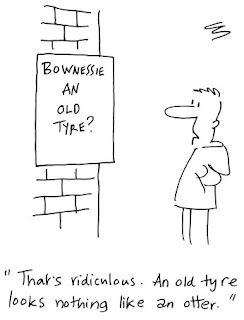 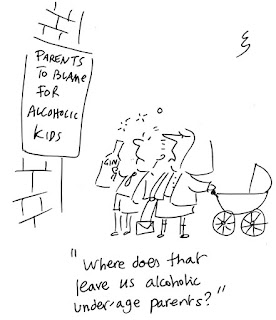 The news over the last two weeks have shown that we all have an appetite for certain basic human rights. These include the right to freedom, the right to democratically elect our leaders and the right not to get shot at by leathery-faced lunatics in dark glasses.
Another right, often overlooked by short-sighted local councils, is the right to go.
Given that we elect and pay for these councils, one would imagine they have our best interests at heart. Sometimes, it seems, they forget our most basic needs in the desire to cut costs. Yes, I’m talking about toilets. Or rather, the Westmorland Gazette has been talking about them.
Kendal has followed the rest of South Lakeland in closing down public loos. This is particularly cruel in Kendal where, thanks to the splendid traffic system, you may have spent several hours cooped up in a car, looking for somewhere to park. And it’s one more thing to help deter anyone from visiting the town.
Fortunately, in a move worryingly close to the Big Society waffle from David Cameron, local organisations have come to the rescue. Some of the shops, pubs and attractions in town have offered to make their loos available to the public.
So this was the main subject of the cartoon ideas, submitted on Wednesday afternoon to the Gazette’s news desk. The other was the intriguing news that 1980s post-punk bombshell Blondie is going to be headlining this year’s Kendal Calling music festival. Something of a coup. But given her age, I hope the toilets will be open.
As usual, you can find out which of the sketches made it’s way onto the front page by buying the newspaper or popping over to my website. 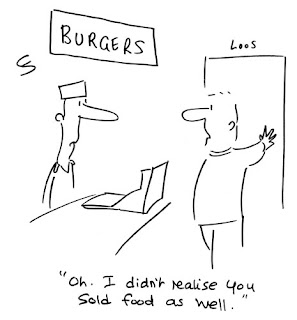 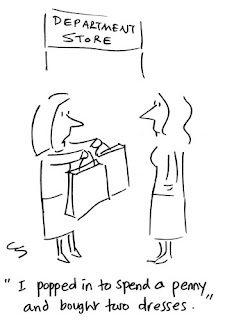 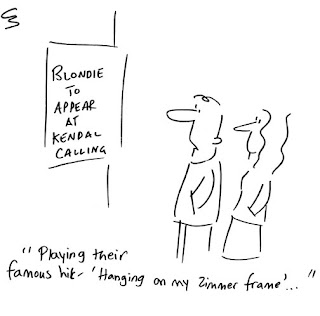 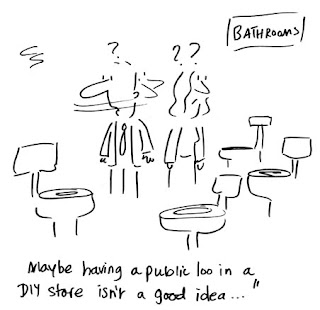