Despatch from the Westmorland Gazette office, Wednesday afternoon.
Everyone is working at this week's paper but there is an air of hushed expectation. Rumour has it that William Hague is in the building. This isn't a random, gratuitous occurrence. Hague is in South Lakes canvassing on behalf of the local Conservative candidate, Gareth McGareth.
A photographer is despatched to reception and the editor is wearing a jacket. Everyone adopts a busy, nonchalant pose. We've all met major UK political figures before, yawn, yawn.
I'm feeling a bit shifty. The story I’m illustrating this week concerns a scarecrow festival. The temptation to tie that into Hague's visit has, regrettably, proved too much.
"Second floor," says Stella the lift. The doors open and there’s a surge of dark suits and the impression of a fabulous, eight-legged political insect scuttling into view. Hague is much taller in real life. And narrower too. I must get the settings fixed on my widescreen television.
He's accompanied by a frightfully young chap who is someone important because he's clutching a Blackberry (the phone not the fruit, although I can’t vouch for the contents of his pockets). Gareth is third and a lady in a jolly jumper brings up the rear. I have no idea who she is; possibly the Biscuits Advisor. Biscuits have become a gigantic campaign issue ever since Gordon Brown refused to identify his favourite on Mumsnet.
Gareth smiles inclusively at everyone, baffling one journalist by asking "How are you? You're looking well." ("I've never met him before in my life,” she says afterwards.)
The party disappears into the meeting room. That explains the tray I spotted in there earlier. It had been set out with Kendal mint cake and Nestle's Blue Riband bars. I wonder what it will be if the other parties visit? KitKat for Labour, custard creams for the LibDems and crackers for UKIP?
The Westmorland and Lonsdale constituency is a key marginal. In 2005, Tim Thingie (LibDem) got in by 287 votes. It broke over 3,000 years of Conservative rule in the area. The Tory chap lost because he spent too much time being Mr Angry on Radio 4 instead of sucking up to the locals. Gareth is jolly careful not to make that mistake. He is much in evidence and it is all going GREAT, according to his Twitter feed.
Whoosh. The political party are out of the meeting room. I shuffle my drawings so the Hague cartoons are on top. They spurn the Cartoon Desk and head for the lift. That was brief but heady.
POSTCRIPT:
Later, I discover that Joan, the Gazette's splendid receptionist, insisted Hague and Gareth sign the visitor's book before she let them in. “Got to,” she said, “They could have been a fire hazard.”
I head out in the real world and discover that Gordon Brown has called someone a bigot. That sounds a little unwise. I can't imagine any of those nice Tory visitors doing that. 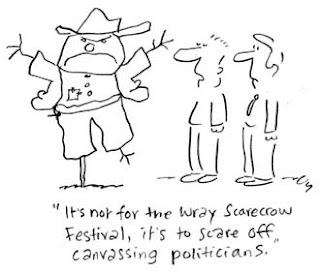 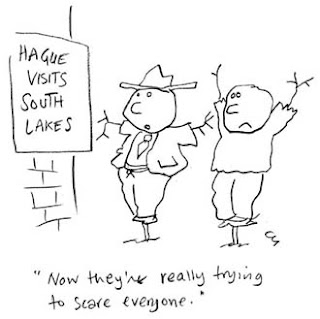 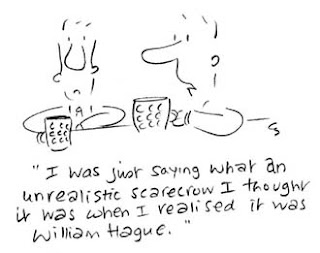 There is nothing better for the democratic process than watching your local parliamentary candidate squirm. Failing legalised use of tasers, the best way to do this is go to a public meeting and ask awkward questions.
Last week, I attended my first husting. These are often held in churches, possibly because they share the church’s shared high ideals or simply that they’re cheap to hire. The location caused me a minor problem; architectural monuments to superstition all look the same to me and I’ve never taken the trouble to learn the names of any of them.
There was a good crowd of people in attendance, together with four election candidates and a chairperson. It was a bit like Question Time but without the token rabid national newspaper columnist on the panel. The audience was very polite and orderly. No political firebrands here. If Thomas Paine had lived in South Lakes, Rights of Man wouldn’t have got written; he'd have been too busy sending letters to newspapers about parking and dog dirt.
There were some splendid questions, although none I’d hoped for (e.g. “why should we let you lot back in after you made such an appalling cock-up of flogging off the railways?”). The candidates generally handled the questions well but I was encouraged to note that the UKIP chap displayed a tendency to go off at tangents and blame everything on the EU.
The candidates’ statements could be summarised as follows:


Tim Farron (LibDem) promised to "work his socks off" (thereby conforming to the Liberal stereotype of sandals), Gareth McGareth (Conservative) stated that if he didn’t get into parliament “there is no plan B, I’m fighting to win” (he may need to reconsider that given the decline in the banking industry since he left), Jonathan Whatsit (Labour) declared unqualified love and adoration for everything in the Labour Manifesto and the bloke from UKIP advanced the startling theory that global warming is a conspiracy and we actually need more CO2 in the atmosphere because it’s good for the plants.
Disappointingly, we only have four election candidates this time round. Gone are the heady days of 2005 when there was a wild card banging on about Windermere speed limits and allowing smoking in pubs. This time even the Campaign for Real Liberals has failed to emerge from its burrow and the rumoured BNP candidate is probably abroad somewhere, getting a nice tan.
So how are the remaining candidates performing on the Grin-o-Meter? 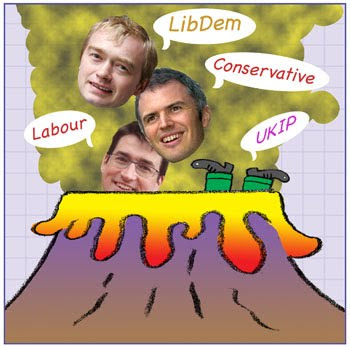 LibDems and Conservatives are still in the lead but Labour has put in an appearance (on the basis that a leaflet has been thrust through my door). UKIP’s presence, so far, is limited to belching CO2 and hot air.
Nine days to go. Can it get any more exciting?
Posted by Colin Shelbourn at 12:04 No comments:

Back in the heady days of the 2005 General Election, all the Westmorland and Lonsdale candidates were called Tim.
This made it remarkably easy to remember their names but introduced confusion when it came to identifying which Tim was winning. After intensive research, and two minutes with a crayon and some graph paper, the Tim-o-Meter was created to alleviate Tim-orientated perplexity. It was remarkably effective and Newsnight’s Jeremy Vine was heard to say that he wished he’d thought of it first.
Now the 2010 election is well underway and only one local candidate is still called Tim, the other having changed his name to Gareth. This makes them easier to distinguish but does muck up the Tim-o-Meter. Undaunted, with a few sophisticated modifications this much-loved electioneering visual aid is reborn as the Grin-o-Meter. 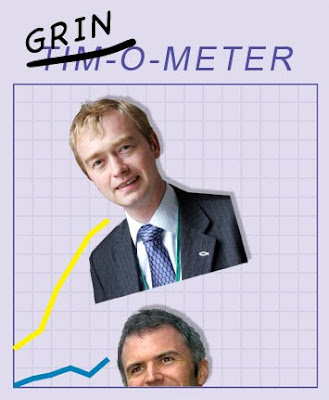 Fitted with an upgraded microprocessor and new spark plugs, the Grin-o-Meter gives an instant visual indicator of the state of play in South Lakeland as the election lurches, ash-strewn, into the second week.
As we can see, Tim and Gareth are the only candidates visible so far. Tim (LibDem) is in the lead with 60 garish signs posted in hedgerows and gardens between Windermere and Kendal. Gareth (Conservative), on the other hand, has only managed 11. Initial research placed this number at 12, one of which read FOR SALE. This seemed rather blatant but, upon closer inspection, it turned out to be a Matthews Benjamin estate agent sign which uses the same colour.
There’s not much evidence of the competing candidates: Labour is fielding Jonathan Todd but hasn’t a hope in South Lakeland, where the last working-class person became extinct in 1974. Presumably Labour have chosen someone who they either don’t like very much or who needs practice losing. The Real Liberals - a sort of Jeremy Thorpe tribute act - have promised to stand as soon as they think of a policy. UKIP’s candidate is wandering around on day release and the BNP are trying to find a Petri dish large enough to grow one in.
But when it comes to elections, there really is no substitute for prodding your prospective parliamentary candidate in person. Get along to the local hustings. Ask awkward questions. Cause trouble. An election only happens once every five years and it’s much more entertaining than finding out who’s going to play Dorothy in the Wizard of Oz.
Posted by Colin Shelbourn at 15:08 4 comments:

The South Lakes is, apparently, a key marginal in the fight for the next General Election. It's a tense battle between the Conservatives and LibDems and one the Tories need to win to be sure of a majority in the Commons.
This means we'll be seeing some of the Westminster heavy hitters campaigning in the area.
The story was front page news on last week's Westmorland Gazette, so I produced a series of ideas for the cartoon. You can see these below, along with the one that made it. Note the changes to the final cartoon - partly for legal reasons but mostly because it made the joke stronger. 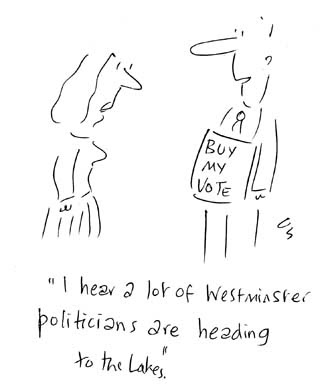 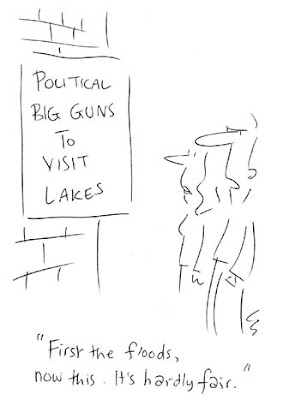 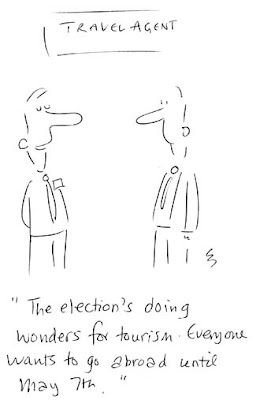 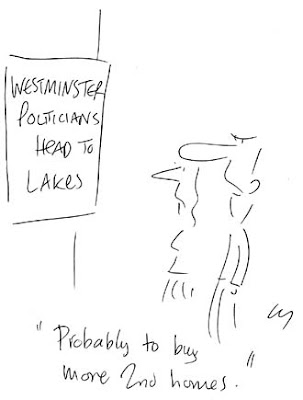 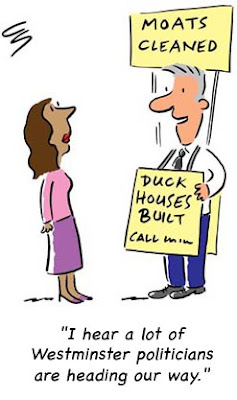 Posted by Colin Shelbourn at 18:47 No comments:

One of this week’s Westmorland Gazette stories concerns a monkey. It had escaped from Dalton Zoo and after five days of heady freedom, was recaptured in a local church.
Here are the sketches which led up to the front page cartoon. Oddly enough, one or two were deemed unsuitable for a family newspaper. You can see which one got in by buying tomorrow’s paper, or, for the geographically disenfranchised, visiting my website. 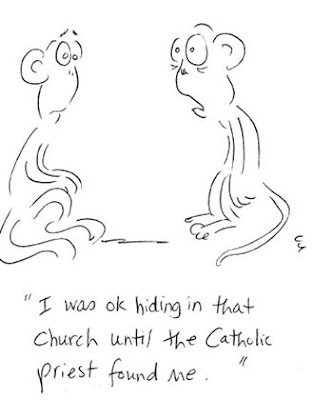 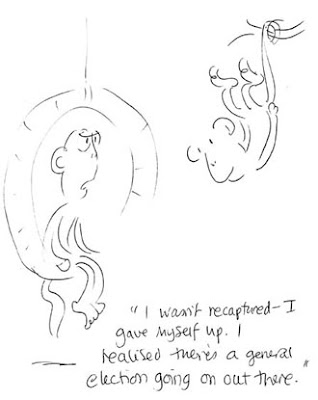 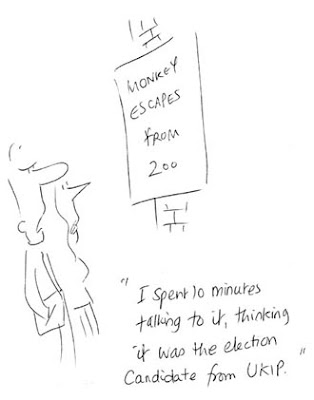 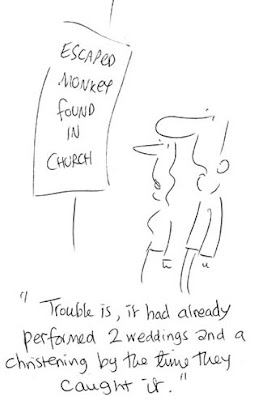 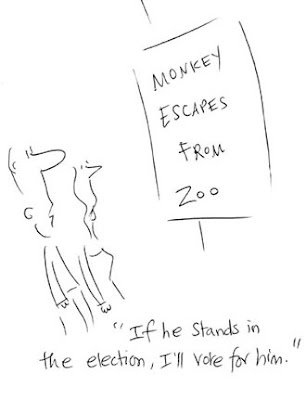 I had a letter from George Osborne last week. You know, the shiny-faced Chancellor of the Exchequer wannabe. This was shortly followed by a letter from William Hague. He is apparently no longer a failed Prime Minister but is now Shadow Foreign Secretary, responsible for acting a bit cross when the real one does something he doesn't like.
As jet-setting international cartoonist, I receive letters from the great and influential all the time. After last year’s Copenhagen Climate Conference, in response to posting a message on his website, I got a friendly email from the governor of California, Arnold Schwarzenegger. "My fellow Californian," it began, which I took to be a term of endearment. It was a really thoughtful touch and made me want to watch The Terminator all over again.
George Osborne's letter was less exciting and, to be frank, a bit vague (which is entirely appropriate as most of us are a bit vague about him). There was some stuff about the economy and balance of payments deficit, none of which I bothered to read. He finished by asking which person I would rather see as Prime Minister - Gordon Brown or Big Dave Cameron?
He’d written Nick Clegg out of the race before it had even begun.
A dramatic surge causing the LibDems to sweep to government is bordering on the unlikely but it would have been kinder to at least pretend there was a possibility. We may get a hung parliament, in which case they’ll have to take turns like on Have I Got News For You (as long as Brian Blessed isn’t one of them).
I suspect Shiny George had baser motives. He was hoping I’d panic and forget about my local LibDem MP, Tim Thing, and thereby vote for the Tory candidate, Gareth McGareth. Yes, the election has come to South Lakeland. Oh hurrah.
A golden host of LibDem signs has already sprung up throughout the area: “Tim, the local choice”, “Tim - winning here” “Hurrah for Tim!” and “God sacrificed his only Tim for Mankind.” (I may have got that one a bit muddled over Easter).
Tory signs are less obvious. I have seen one for Gareth McGareth but it was alongside a bigger one for Beatlemania and I couldn’t tell if the two were connected.


We could all end up voting for Ringo instead.
I intend to enjoy this election. How about you?
Posted by Colin Shelbourn at 12:30 4 comments: