Monday, 19 July 2013, 10.27 p.m. - A time to go down in history.
The Cassini spacecraft orbiting Saturn was in a position to take a photograph of Earth and, this time, we were all in the know. In fact, NASA had asked everyone to go outside at precisely that time and wave at Saturn.
So that’s what we all did. Furthermore, in the UK we were lined up so that we actually faced Saturn at the correct time. Even more amazingly, we had clear skies.
The Eddington Astronomical Society organised a mass viewing at Kendal Castle. 120 people turned up to wave at Saturn and view the solar system's 2nd largest planet.
NASA reported many of the events throughout the world and, gratifyingly, the Kendal Castle event was the only one featured in the UK.
For this historic event (and because I like drawing googly aliens), I had to draw a cartoon. Below are the ideas I pitched to The Westmorland Gazette.
But which, I hear you (and various aliens) cry, is featured on this week’s front page?
Well, to find out you can visit my website. But before you do, cast your vote in the comments box below. 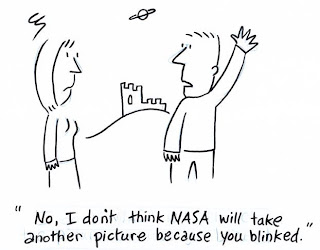 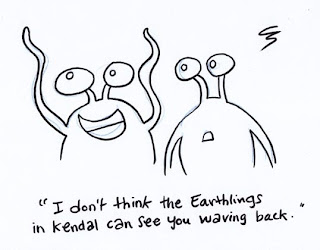 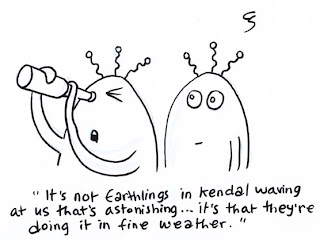 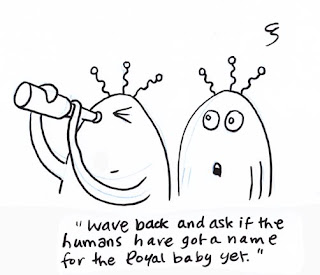 P.S. If you wish to see Cassini's snapshot of us all waving, click here.
P.P.S. Yes, for anyone wondering, I went outside to wave at Saturn. My dogs had other ideas, however, so some of us barked at Saturn instead.
Posted by Colin Shelbourn at 06:00 No comments:

A Bit of a Royal Do

Excitement gripped the area this week. Could it be the return of Eric Robson and Gardener’s Question Time? No, someone even more august, despite the fact that it’s July. The Queen and Princess Royal were visiting.
It’s been many decades since the Queen visited South Cumbria, possibly put off by the weather. I can’t speak for the Princess Royal, partly because it took me a while to work out which one that was. (Not Edward, apparently.)
The Royal Visit began in Kendal, progressed to Windermere and then set sail on the lake for Brockhole, where the Royal Party enjoyed half-an-hour on the Treetop Trek aerial playground.
The last time the Queen visited, social media consisted of the Court Circular. Today it is slightly different. By following #royalvisit on Twitter, anyone could be kept informed, read live updates and see photographs tweeted from the scene by citizen journalists (this is one of the best). As one wag pointed out, it is Royal protocol to curtsey before snapping her Majesty with a smartphone.
The sun shone, the whole area was a-buzzing (not just with bees) and there was a general good feeling in the air.
And it was press day at The Westmorland Gazette, so how could a cartoonist for Her Majesty’s Press spoil it all by being customarily cynical and embittered? Besides, he might end up in the Tower.
Below is a selection of cartoon drawn for the Royal Visit, with a wider selection of captions. There were also a couple of other stories which I sketched, but don’t let them trouble you.
So, you ask, which Royal Cartoon made it into the newspaper? Well, I don’t know. Apparently at Gazette HQ everyone picked a different one. Press day during a Royal Visit is an exciting affair and as the paper was being assembled in all directions, I drew up the final art and left the captions with them. In an hour or so, I’ll pop out and buy the paper. I’ll know which cartoon they chose, just as soon as the readers.
Loyal readers in far-flung places can see the chosen cartoon by visiting my website, sometime on Friday. 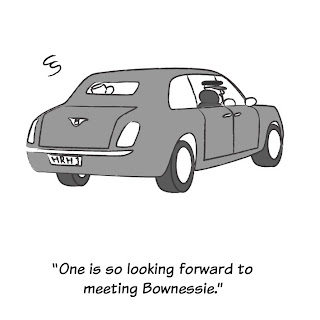 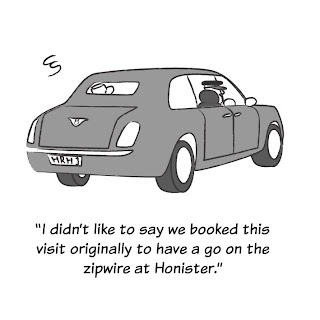 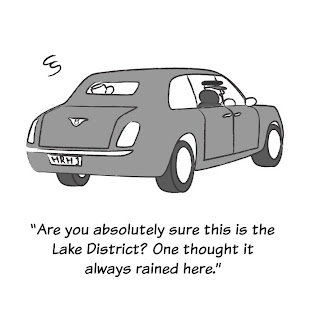 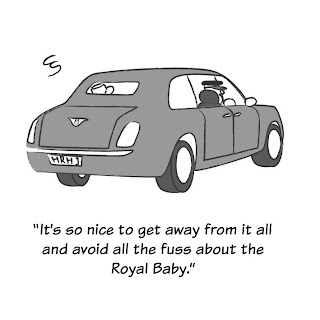 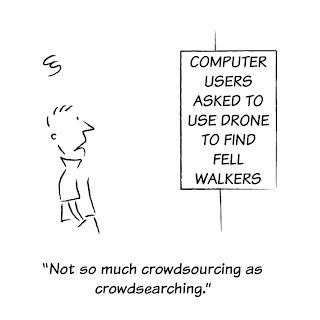 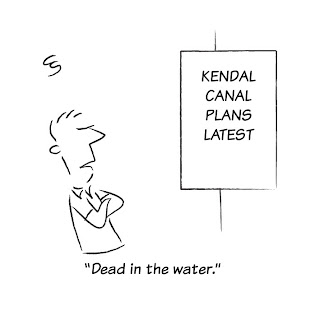 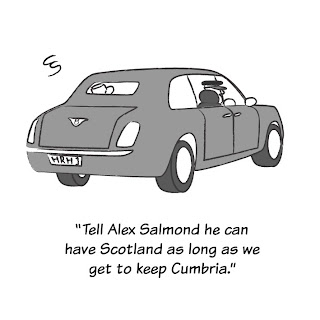 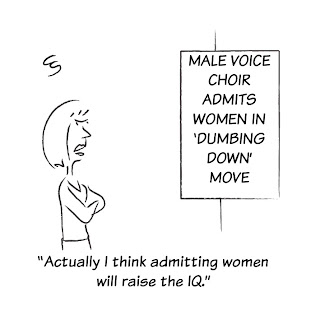 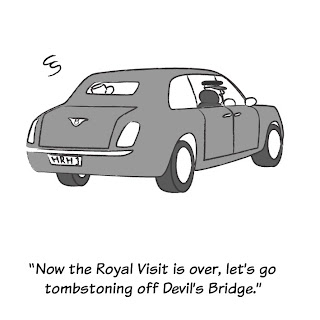 An exciting media week in the Lakes. The combined might of Cumbria PR and environment campaigners Windermere Reflections succeeded in getting BBC R4’s Gardner’s Question Time broadcast from Brathay Hall in Ambleside.
This was a fun event which is (shhh) pre-recorded. Anyone attending was allowed to pitch a question to the panel. These were then answered in turn by Toby Buckland, Anne Swithinbank and Bunny Guinness. The event was introduced and chaired by son-of-Cumbria Eric Robson.
BBC recordings are always interesting and I’d urge you to go along to one, if you get the chance.
They’re also a good opportunity for sketching, as you can see below. 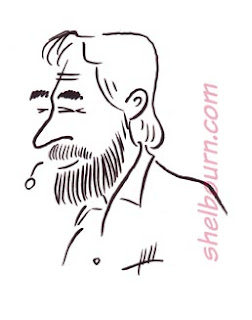 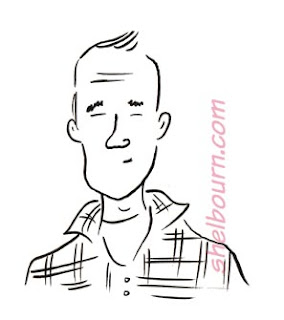 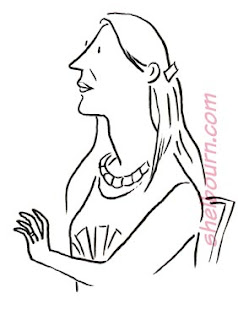 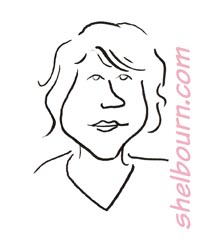 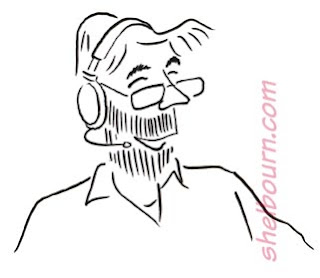 At the end of the recording, Windermere Reflections’ Amanda Holden presented the chairman and panel with personalised bottles of the exclusive Mere Gold beer, brewed by Bowness Bay Brewing Company. Fortunately, ace illustrator and photographer Pam Grant was on hand to get the pack shot. 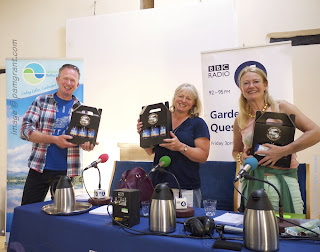 (Click on the photo to see a larger version)

Gardener’s Question Time goes out on BBC Radio 4 at 3pm Friday and again at 2pm on Sunday.

* Since you asked, my question was: “I have built a massive extension on the side of my house. What fast-growing plant would the panel recommend to hide it from the National Park planners?”

P.S. More media: On Sunday 14 July, at 9.40 a.m., I will be on BBC Radio Cumbria during Val Armstrong's show, describing my favourite place. (I restricted it to the Lakes as the budget wouldn’t stretch for Belinda Artingstoll to interview me in the Swiss Alps.)
Posted by Colin Shelbourn at 12:23 No comments: