Last week's Westmorland Gazette had a number of exciting stories to tempt a front page cartoonist.

A pair of capuchin monkeys had escaped from a local zoo.

A frustrated householder had painted her wheelie bin to prevent it being stolen (she said she had "pimped my bin").

And UKIP have announced their parliamentary candidate destined to lose his deposit in the General Election next May. As those chaps at The Apathy Party tweeted, "Cumbria has long been renowned for its wide variety of food. Now it's got fruitcake too."

Below are the ideas I pitched to my steamed editor. As upstanding journals like the Gazette have to remain firmly neutral (it was founded by a Tory), their front page cartoonist isn't allowed to poke fun at major political parties. Not even wacky, amusing chaps like UKIP with their jocular, off-the-wall views on foreigners, Einstein's theory of relativity and climate change.

However, all was not lost. The drawing for idea number five combined with an idea about the bin to become the final cartoon. You can see it below. Feel free to vote for the one you would have chosen by adding wise words to the comments. 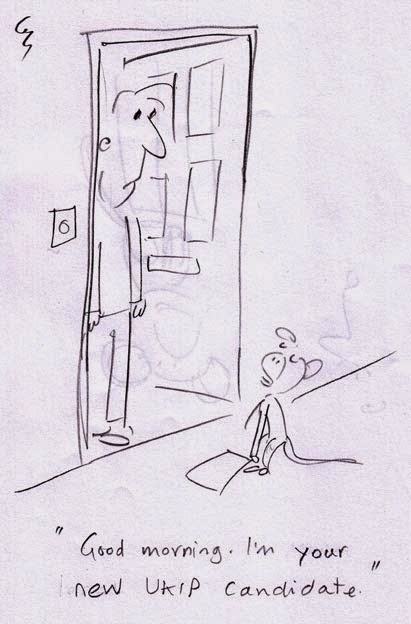 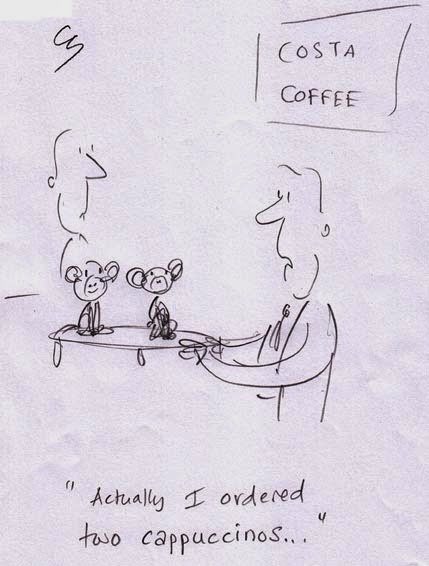 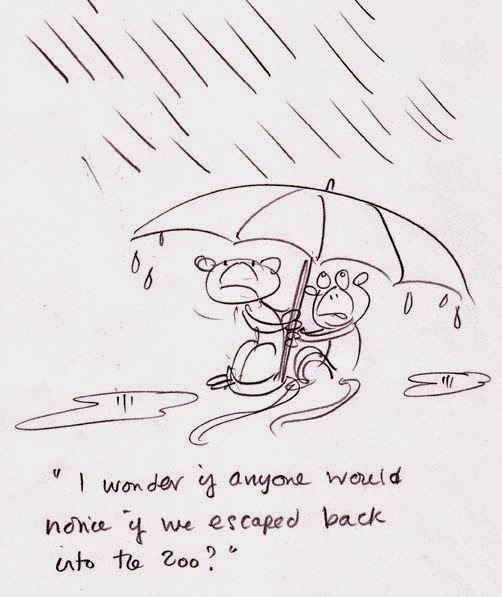 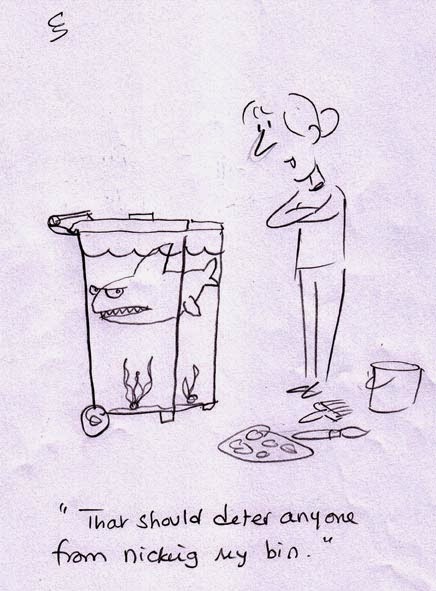 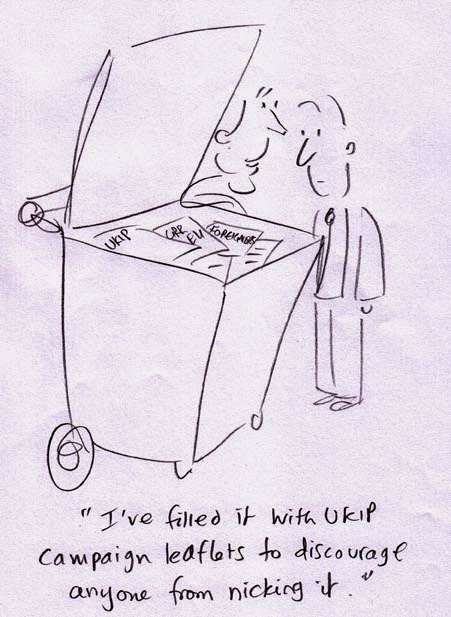 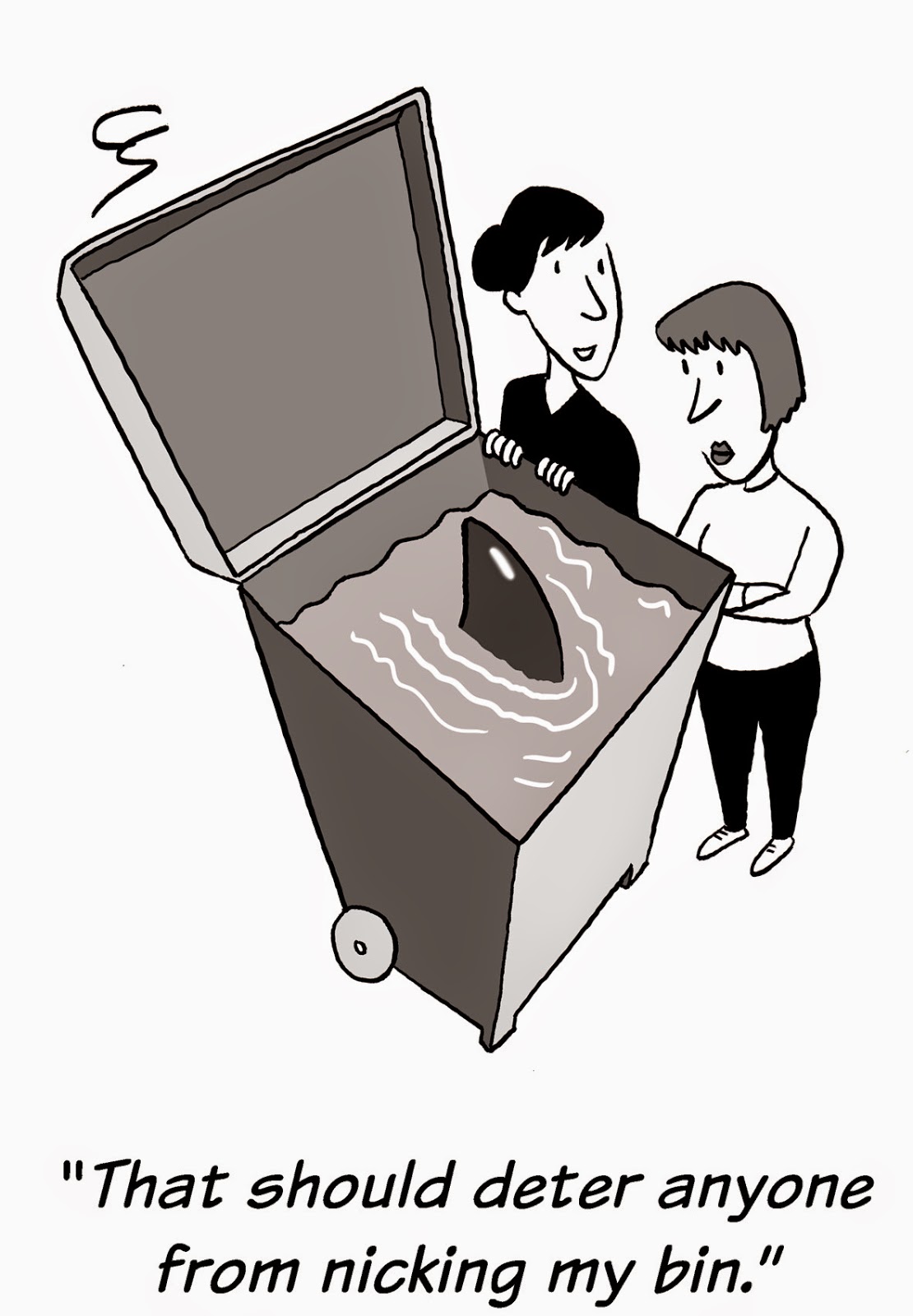 Click on any of the above images for the full high-definition version.

Today the second Lakes International Comic Art Festival launches. There lies before us a weekend of top flight talent from around the globe - internationally acclaimed writers, artists and publishers - all descending on the Cumbrian town of Kendal.

It's a place more renowned for mint cake and Wainwright, so seeing the Bat symbol fly over Kendal Town Hall may come as a shock to some local residents.

But if they keep there eyes open, there's even more disruptive behavious to see.

The Comic Windows Art Trail is colonising 38 shop windows around the town, to display work by a number of creative individuals and organisations, tied into the general theme of the Comic Art Festival. It's not all superheroes but they do tend to dominate.

When I was asked to join in, back in May, I airily said "yes" and decided to worry about it later. As the deadline approached, it occurred to me that I hadn't got a clear idea what to do. I was going to occupy the Westmorland Gazette window. Something on a Gazette theme? Maybe boasting about having celebrated 30 years as their cartoonist? That seemed a little self-referential.

Then I happened across one of my old postcards and a theme began to emerge. 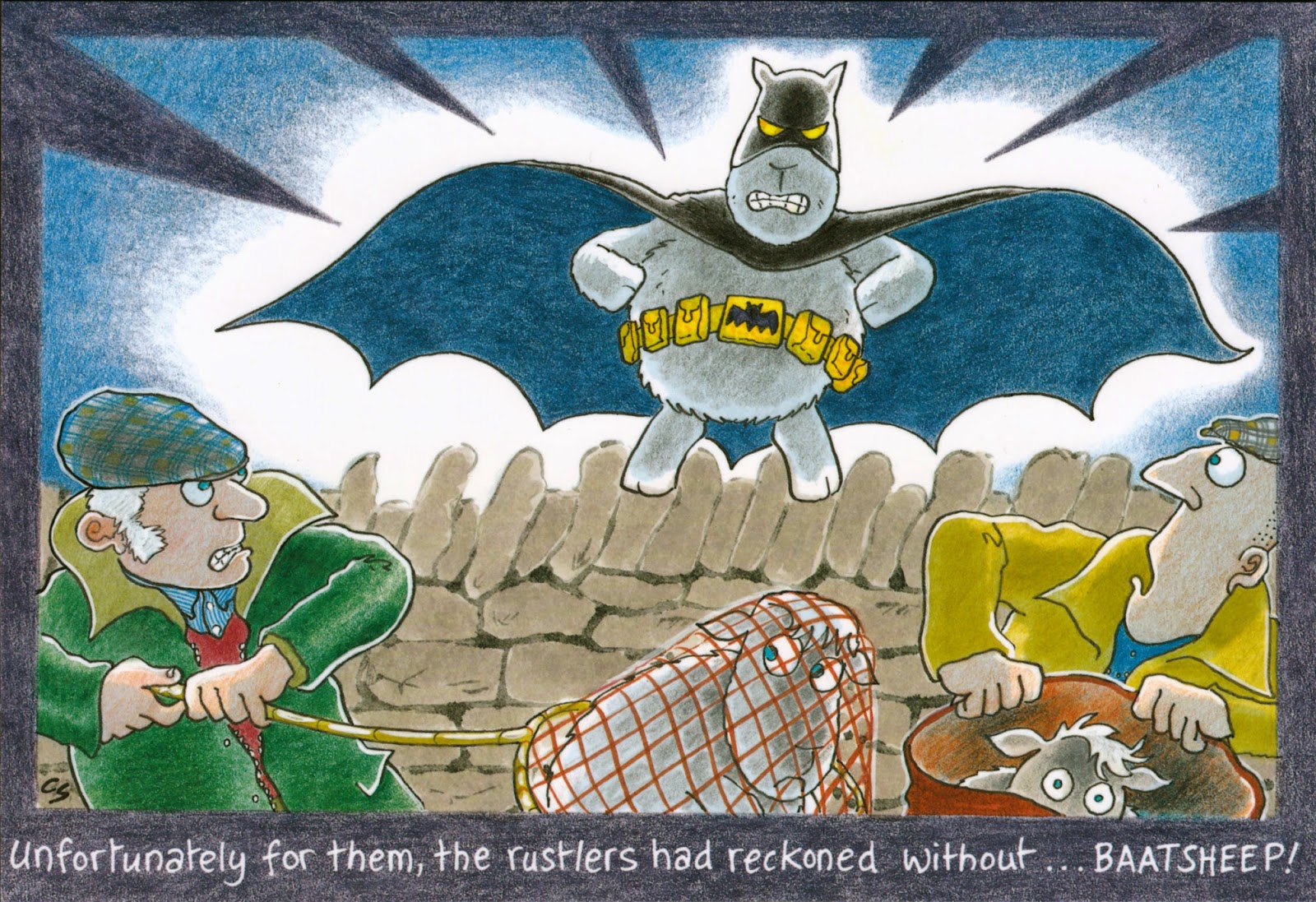 The first sketch was a little rough

But it soon developed into something more promising

The addition of a spoof Gazette front page was fun and I added an iconic image for the Dark Knight fans. Finally, it was due to finish with the original postcard. Time and a trip to Brussels got in the way of that plan so I ended up redrawing it, firing it off to MTP-Media and relying on them to instal it for me whilst I was away!

The final display is now in the Westmorland Gazette window. 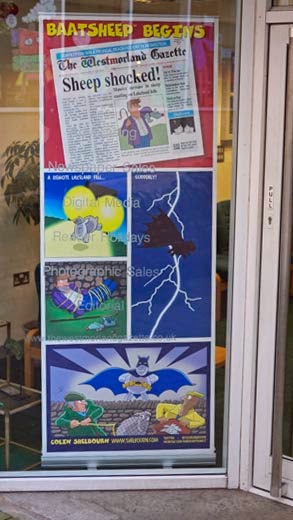 There's a competition. You can vote for it, if you wish, and I may win a lavish prize. (You don't have to do this but I will ask the NSA where you live.)

But whatever you do … don't miss the rest of the Comic Art Festival weekend.

PS You may find me tweeting about the festival here. I'll be armed with a sketchbook so will post some sketches on the blog. And meanwhile, here's that front page … 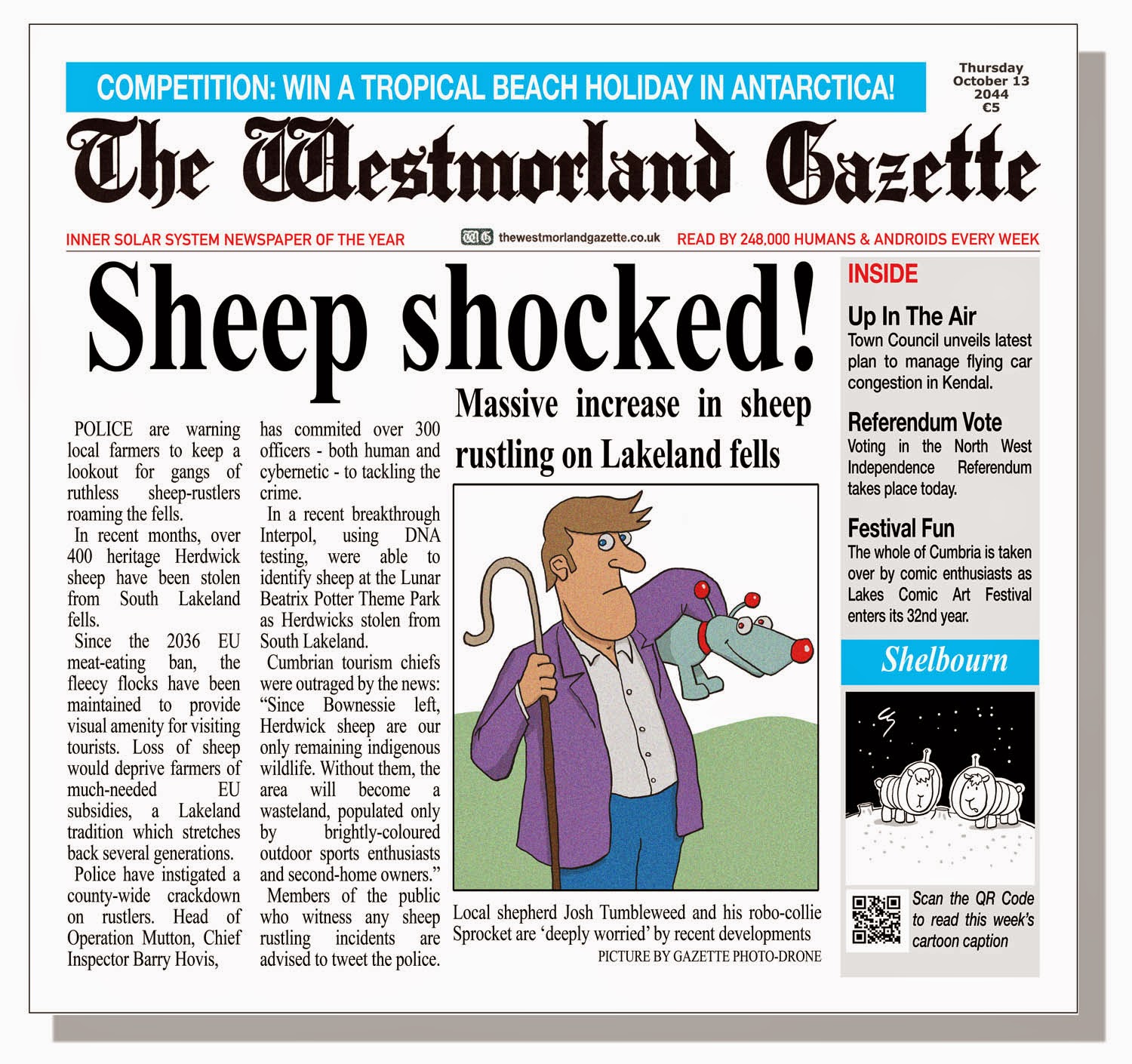 Books Are My Bag

High street bookshops can be a place of wonder. Books Are My Bag is a nationwide campaign to celebrate and support them, with its own Official Book.
Last Saturday, the Society of Authors’ Authors North group got involved with a glittering, glamour-filled gathering at the Imperial War Museum, Salford Quay, Manchester. Silverdell Bookshop gave a special launch for the 2014 campaign during which we were asked to pose with a campaign bag and tell the world what was our favourite book and bookshop.
It gave me a slight problem.
My favourite bookshop ever is Gullivers, in Wimborne Minster. I spent many happy hours in there as a kid. It wasn’t the world’s largest bookshop but it’s where I first discovered the magic of Hergé and the excitement of John Wyndham. Situated just around the corner from Wimborne’s famous chained library, it was my first, real bookshop experience.
Sadly, it is no longer local to me. I moved away and now my favourite bookshops are scattered across the country. One of my favourite bookshops these days isn't a real bookshop at all. It's Amazon.
That’s not a popular thing to say if you’re an author. We’re supposed to castigate this monolith for accelerating the closure of the high street bookshop. But much as I love browsing in a real bookshop, here’s the thing - Amazon stock my books.
Local bookshops have limited space, lots of demands to stock the latest, the biggest seller and it can make it difficult to stock a local author's books.
My cartoons appear on the front of the local newspaper every week. I’ve drawn a display for this weekend’s Lakes International Comic Art Festival. So with a bit of wheedling, Waterstones in Kendal are supporting my book. It's on their shelves. They have signed copies. Go buy it now.
And I'll push people in their direction because of it. Local authors talk to local people (I give a lot of talks and workshops).

But Amazon has changed things. Authors are free to experiment, self-publish, work for smaller publishers who find it hard to get onto the shelves of busy local bookshops. That's exciting, disruptive, new and interesting.

So high street bookshops are great. Long may they continue. But that doesn't automatically make the online giants a bad thing. I prefer my books to be in both.
Posted by Colin Shelbourn at 12:45 2 comments:

Labels: author, books are my bag, bookshops, Society of Authors

Dull is the New Nude

Enough of W.I. Women throwing off their kit and appearing in charity calendars. The new nude is dull.

The Dull Men's Club has launched it's 2015 calendar and Cumbrian Archie Workman is Mr March. Clearly this is something of which to be proud. The Dull Men's Club is world-renowned for its deep interest in topics such as roundabouts, park benches and luggage carousels. Their website is well-worth a visit. Indeed, a correspondent who shall remain nameless (Steve Barber) emailed me to say that, worryingly, he found it quite interesting.

The announcement gave me the ideal topic for this week's Westmorland Gazette editorial cartoon. Below are five ideas I submitted to my steamed editor. Which would you have chosen?

Don't be dull - make your vote in the comments section below. Then rush excitedly to my website and see if your choice matched the editor's. 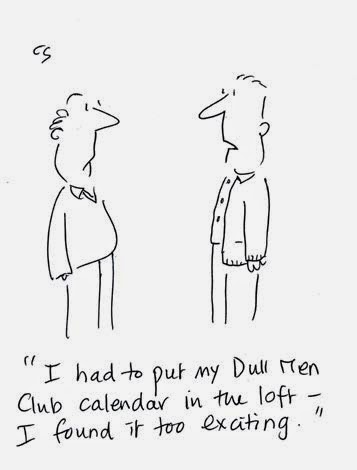 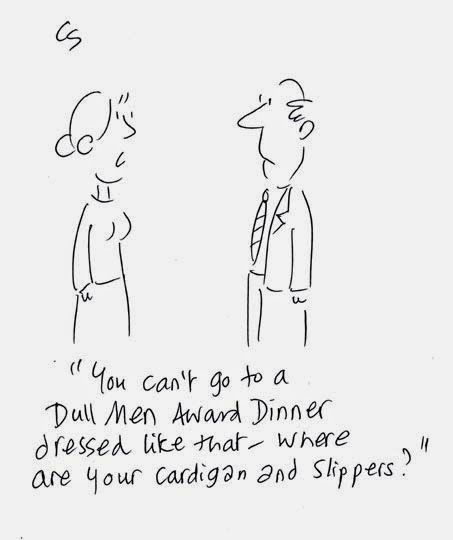 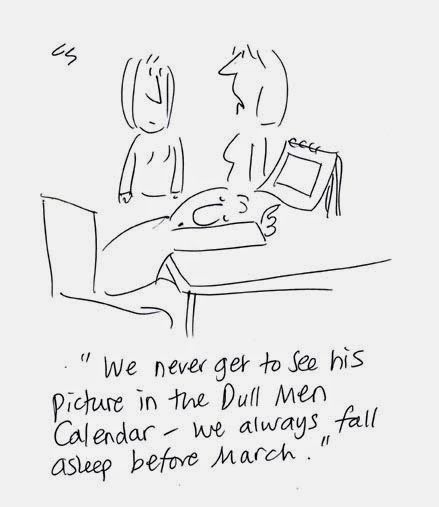 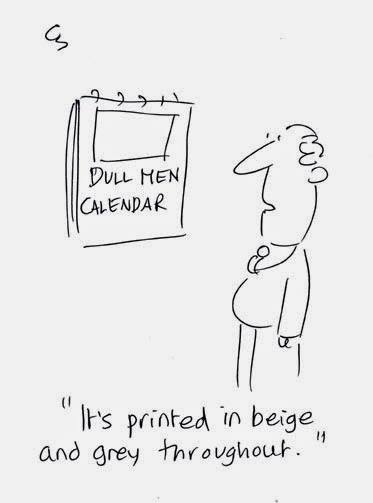 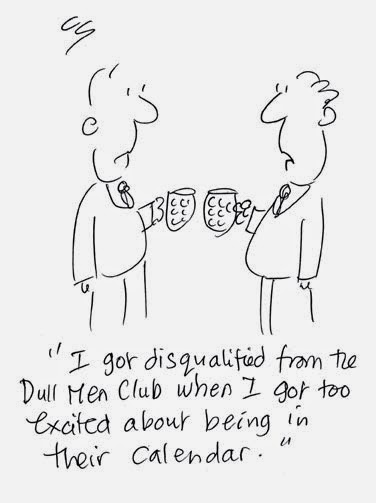