During the last four months the Yorkshire city of Wakefield has been invaded by vampires, werewolves and assorted aliens. Fluffy bunnies have been conspicuous by their absence.

It's all due an ambitious scheme launched by Wakefield Council targeting selected schools to improve performance in maths, reading and writing. As part of this project, an author and I have been working with year 5/6 pupils to help them to write and illustrate stories which are to be published as eBooks.

The author on the project is Tommy Donbavand, creator of the comedy horror series Scream Street. Tommy has worked professionally as a clown, a London stage performer and has written over 50 children's books. He is a ninja master at firing up a classroom with the enthusiasm to write. 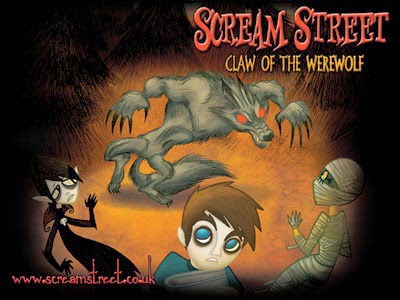 A recurring problem in schools is motivating boys to pick up a pen or a book. Fantasy horror is a terrific way to engage their interest. The fact that the writer is male has provided a useful role model in an environment where the teacher staff is predominantly female.

I've known Tommy for years and illustrated his first two books. Following him into schools is always fun because you never know what awaits you. During this project, at each school I've been confronted by wild and wacky creatures inspired by Tommy's workshops. It's been my role to help the children turn these written characters into drawings and to give them the skills to produce three finished illustrations for their eBooks. 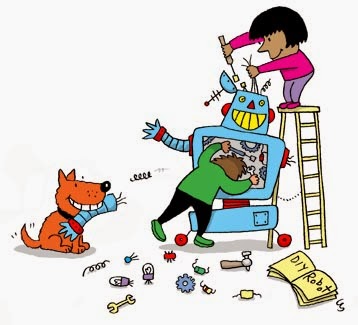 Most children are naturally enthusiastic when it comes to drawing. The challenge has been channeling that enthusiasm into something which is going to be usable as a book illustration without harming the natural charm of their drawings.

Join me in the next episode for the first drawing lesson.
Posted by Colin Shelbourn at 22:19 1 comment:

Jamaica Inn is one of Daphne du Maurier's best loved books. Published in 1936 it tells the tale of a young girl who moves to the inn on Bodmin Moor and falls in love with a local smuggler.

It came as something of a surprise when the BBC announced that part of their new production of Jamaica Inn was going to be filmed in Kirkby Lonsdale. Lovely though Kirkby is, one of the things it is most famous for is not resembling either Jamaica or Cornwall. However the Beeb crew turned up, took over the square and dressed it up to look like Launceston, much to the outrage of residents of the real Launceston.

The drama was broadcast last week. You may have noticed the fuss. Millions complained that the actors were mumbling incoherently. "Technical problems," said the BBC, implying someone had forgotten to plug in a microphone. "Producer problems," retorted BECTU the technicians' union, which may have more credence given that even the new director general Tony Hall has complained of muffled dialogue in BBC dramas.

It made a good subject for the Westmorland Gazette cartoon. You can see my suggestions below and discover which made the front page by visiting my website here.

And on the subject of the front page, my cartoon has now been running in the Westmorland Gazette for 30 years. Not the same one, obviously, as even I have to think of a new joke now and again. You can read Katie Dickenson's story here and revisit some of my favourite cartoons here. 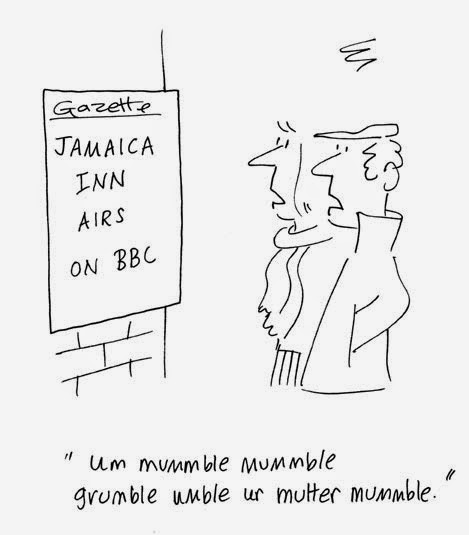 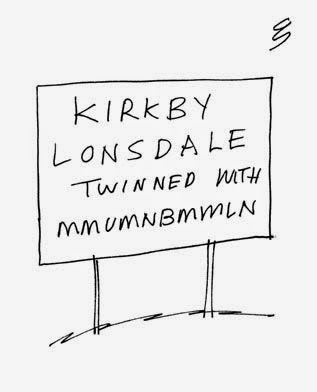 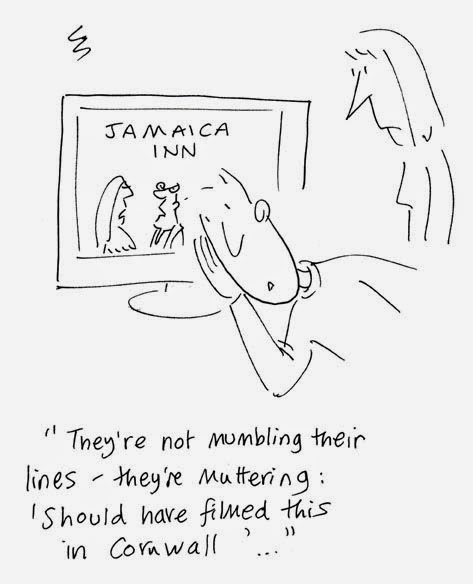 Posted by Colin Shelbourn at 06:45 No comments:

When we heard that Hollywood was going to make a film of his adventures, the excitement in the Westmorland Gazette newsroom was palpable. Who would they cast? Debate raged: John Travolta was a natural for Pat, Scarlett Johanson was born to play Jess the cat and Tom Cruise a shoe-in for Granny Dryden.

I hope that Pat's originator, John Cunliffe, had some input into the casting. He could always ask fellow-Yorkshire resident Joanne Harris for Johnny Depp's number

But the excitement doesn't end there. Postman Pat is returning to his roots with a special gala screening in Kendal on 23 May.

So it is no surprise that almost half this week's Westmorland Gazette is taken up with this important, star-studded news and there could be no finer subject for the cartoon. Below are the ideas I pitched to my steamed editor. But which would YOU pick for the front page cartoon? Vote in the comments below and then head over to my website post haste to see if you were right. 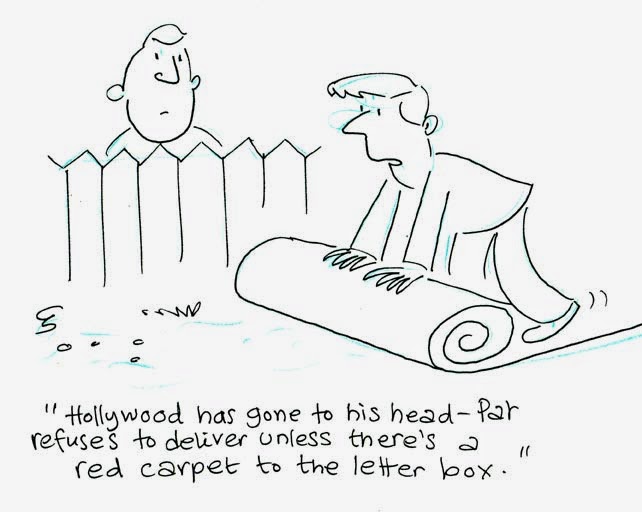 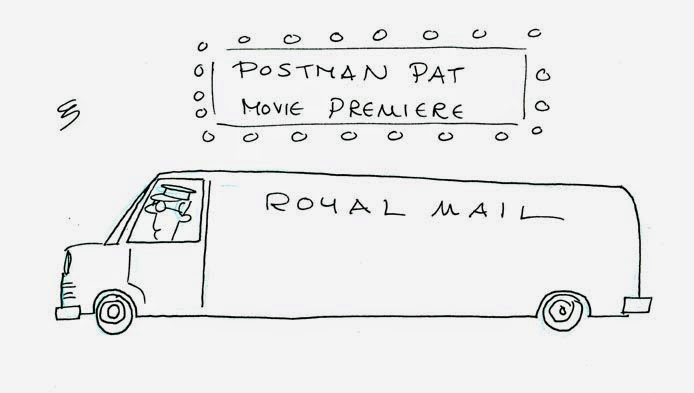 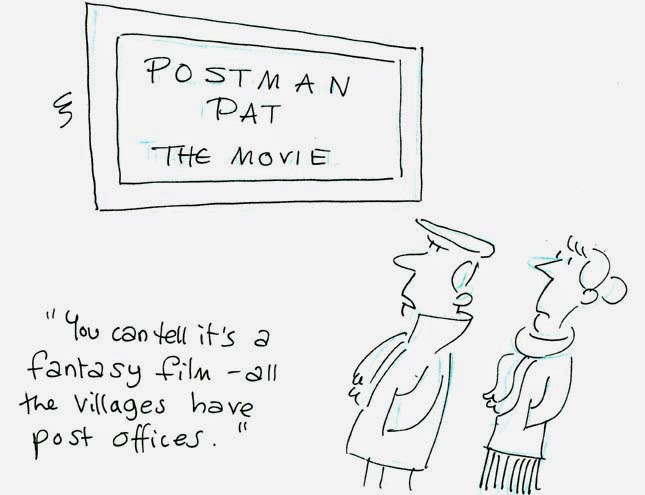 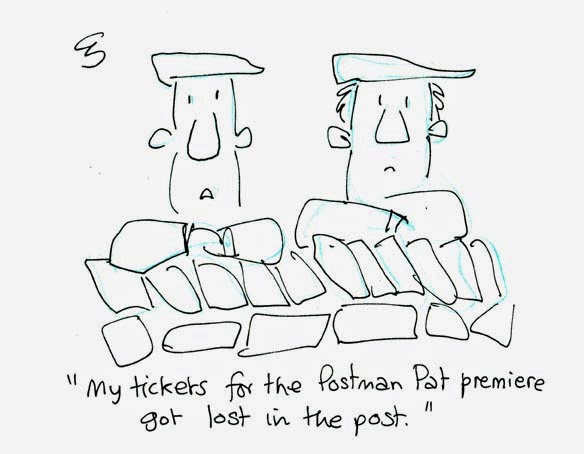 Spool forward 30 years and I am still drawing cartoons about WGH, this time campaigning to keep the place open.

The Morecambe Bay Health Trust * has started a consultation exercise to decide what it is going to do about the three major hospitals in the area. The name of this exercise is Better Care Together, the sort of platitudinous name which leads me to suspect that someone is about to get stuffed. WGH may lose some services. There is even a rumour that the entire site will be 'gifted' to a social enterprise. This is presumably consultant-speak for flogged off to the highest bidding private health care provider.

Defending the hospital's services is going to be a major campaign for The Westmorland Gazette and I was keen to get on board. Cartoons aren't just for jokes, you know.

Talking of jokes, Prince Charles was visiting the area so I thought I better do one about him too.

Below are the four ideas I submitted to my steamed editor. Which one would YOU have chosen? Answers in the comments box below, please. 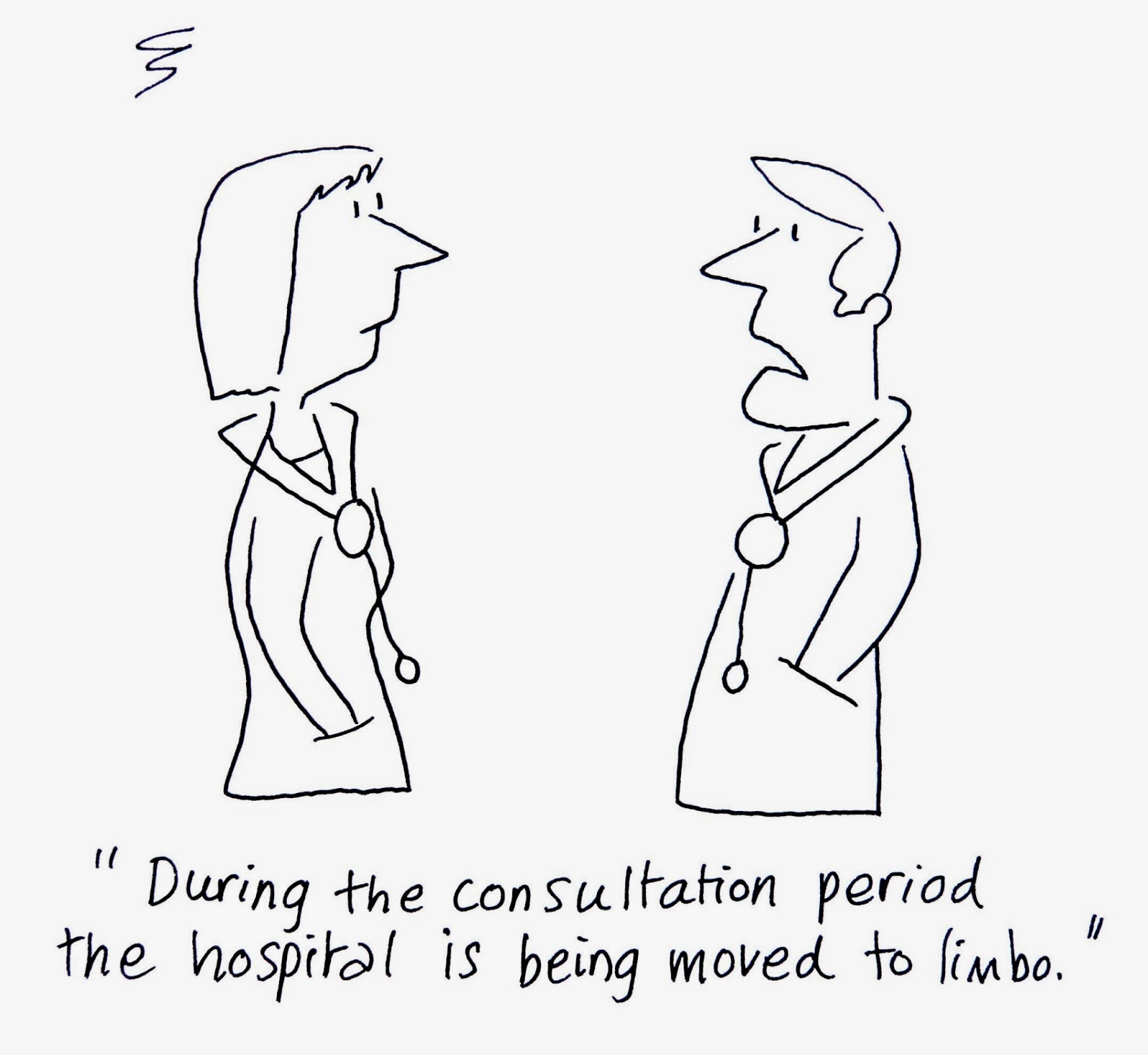 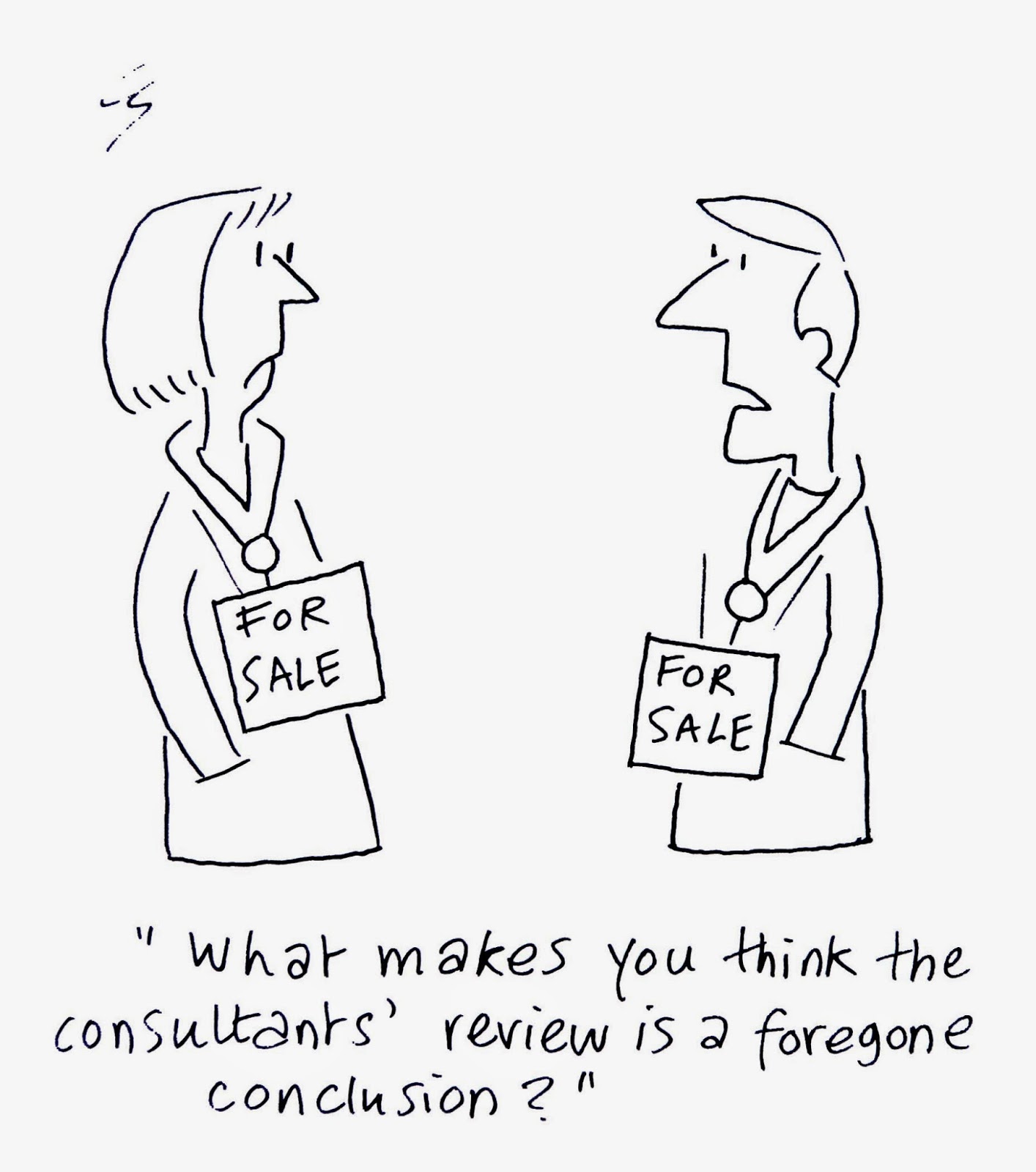 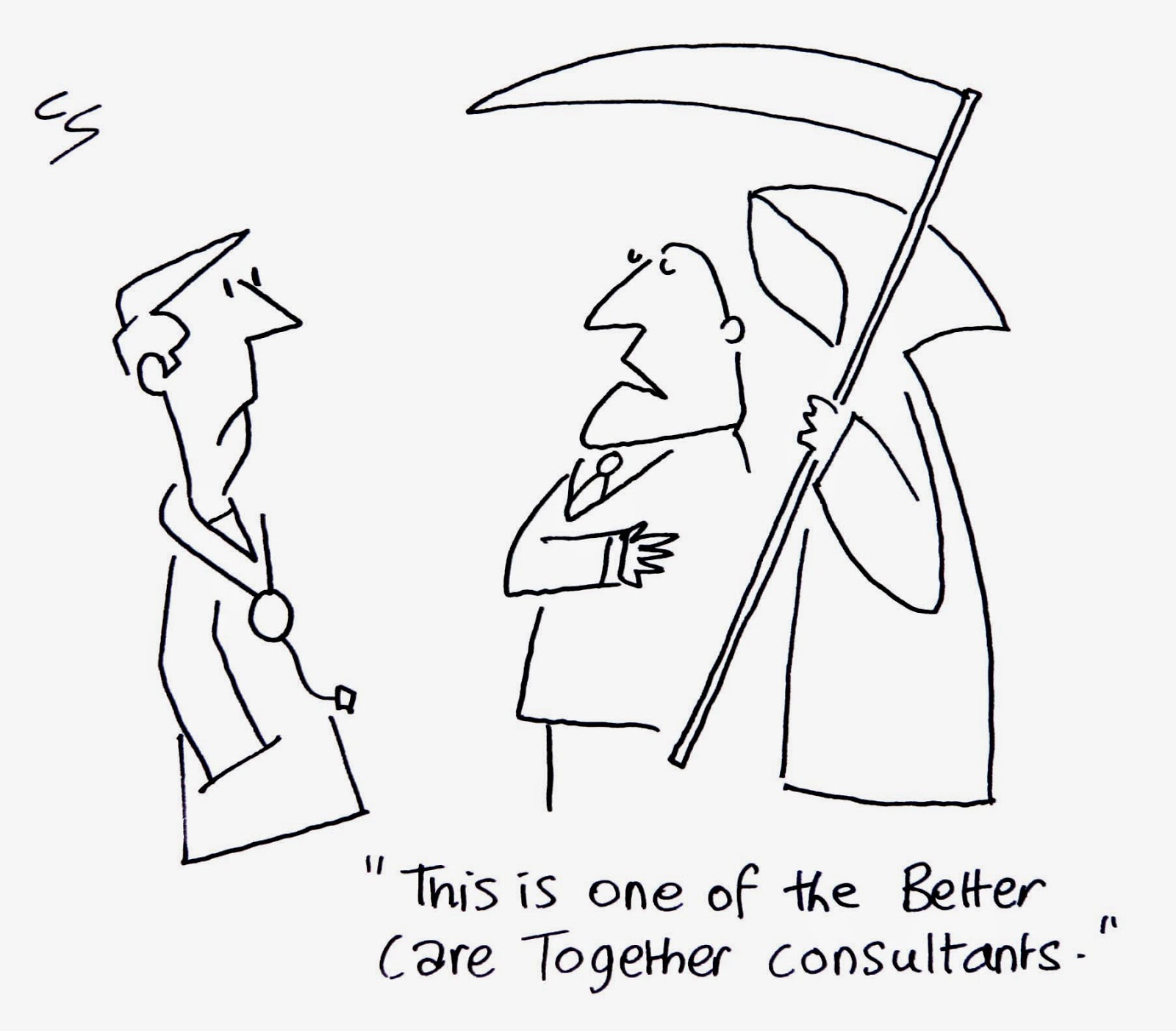 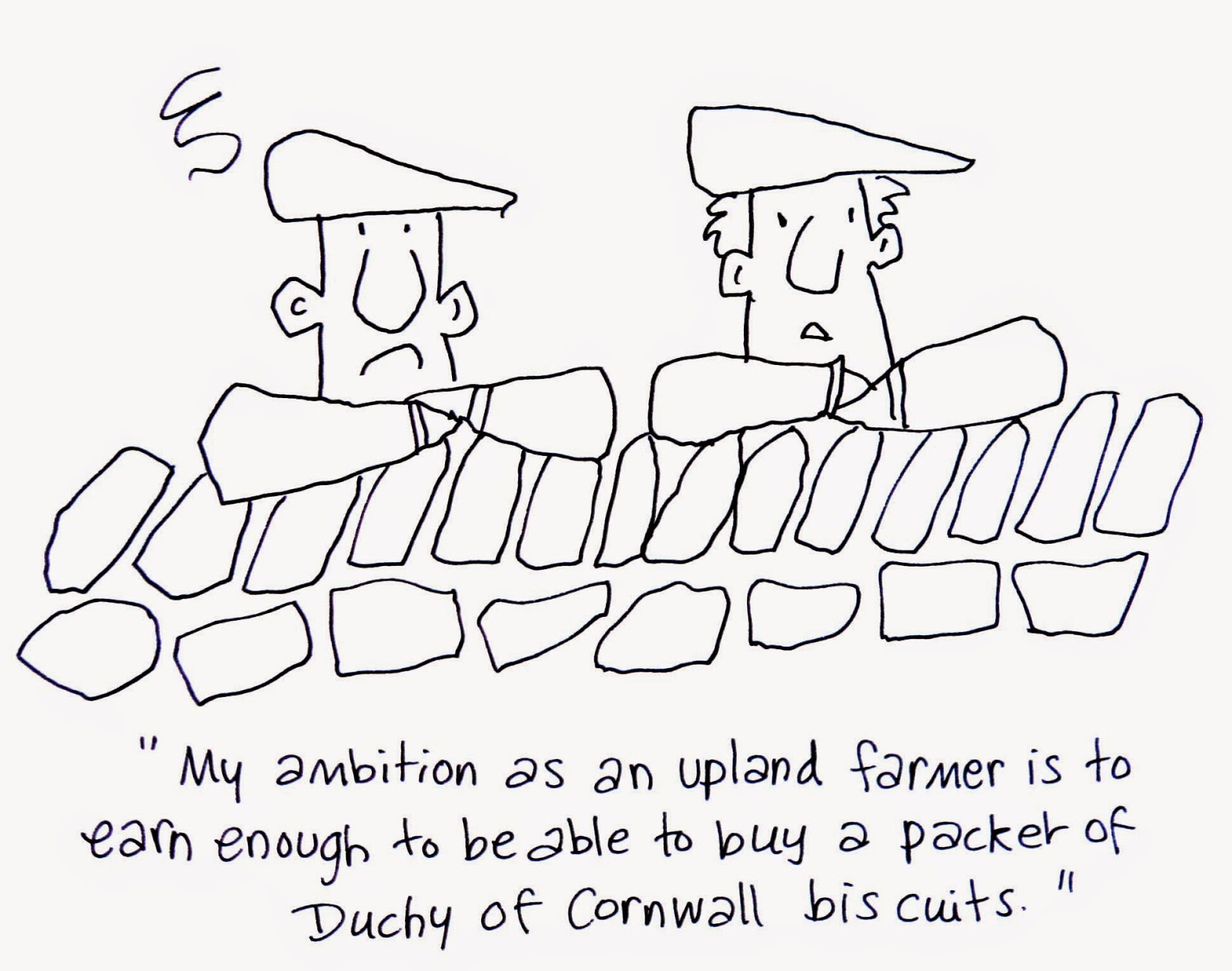 * Morecambe Bay Health Trust isn't called that any more but the new name is too difficult to remember.

Model aeroplanes rarely feature in newspaper headlines. It is not the most controversial of hobbies and the participants are usually genial, pillars of society, the sort of fine, upstanding chaps (mostly) that anyone would be proud to know.

This week, however, one of them got into terrible trouble. A radio control model aeroplane was being flown at Barrow when it went out of control and flew into the restricted airspace around BAE Systems. BAE, as you probably know, make submarines of the nuclear variety so aren't too keen on camera-equipped drones going a fly past.

The result? £4000 worth of fines for the hobbyist.

This was my favourite cartoon target for this week's Westmorland Gazette. I was momentarily detained by the story about an Alpine climbing school relocating to Kendal, but only for one cartoon.

Here are the sketches I submitted to my steamed editor. Which would you have picked for the front page? Make your decision public in the comments boxes below. 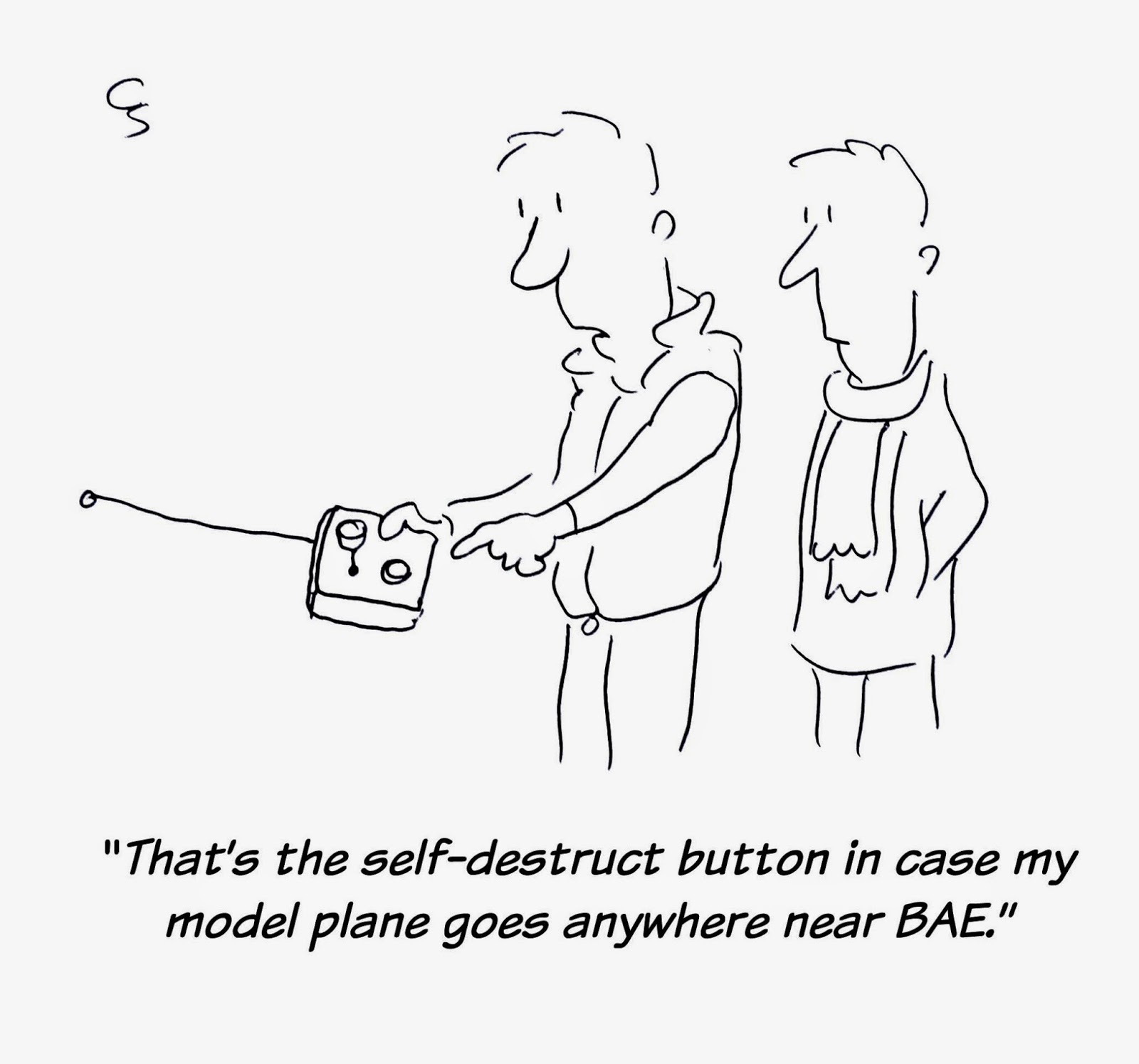 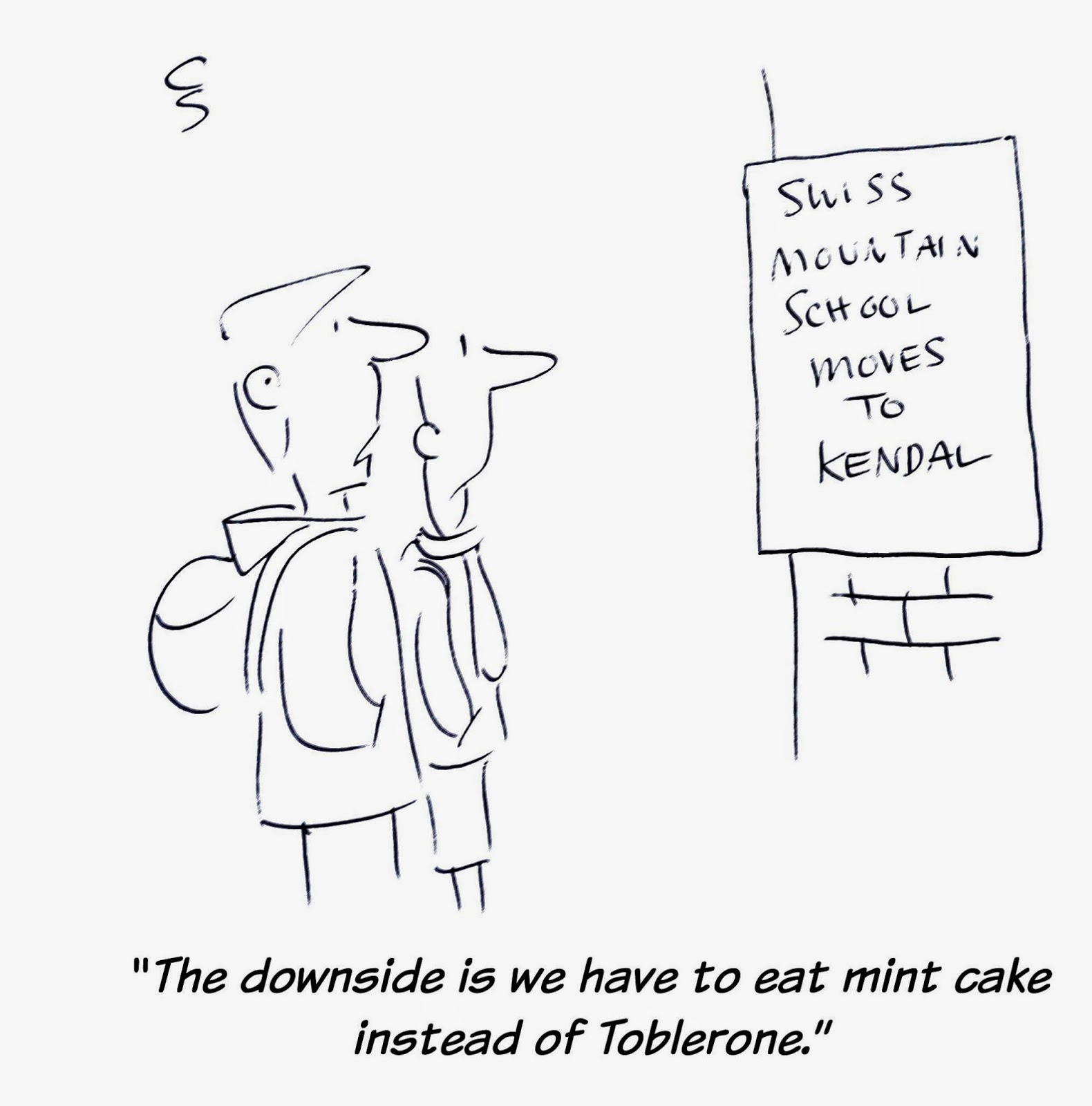 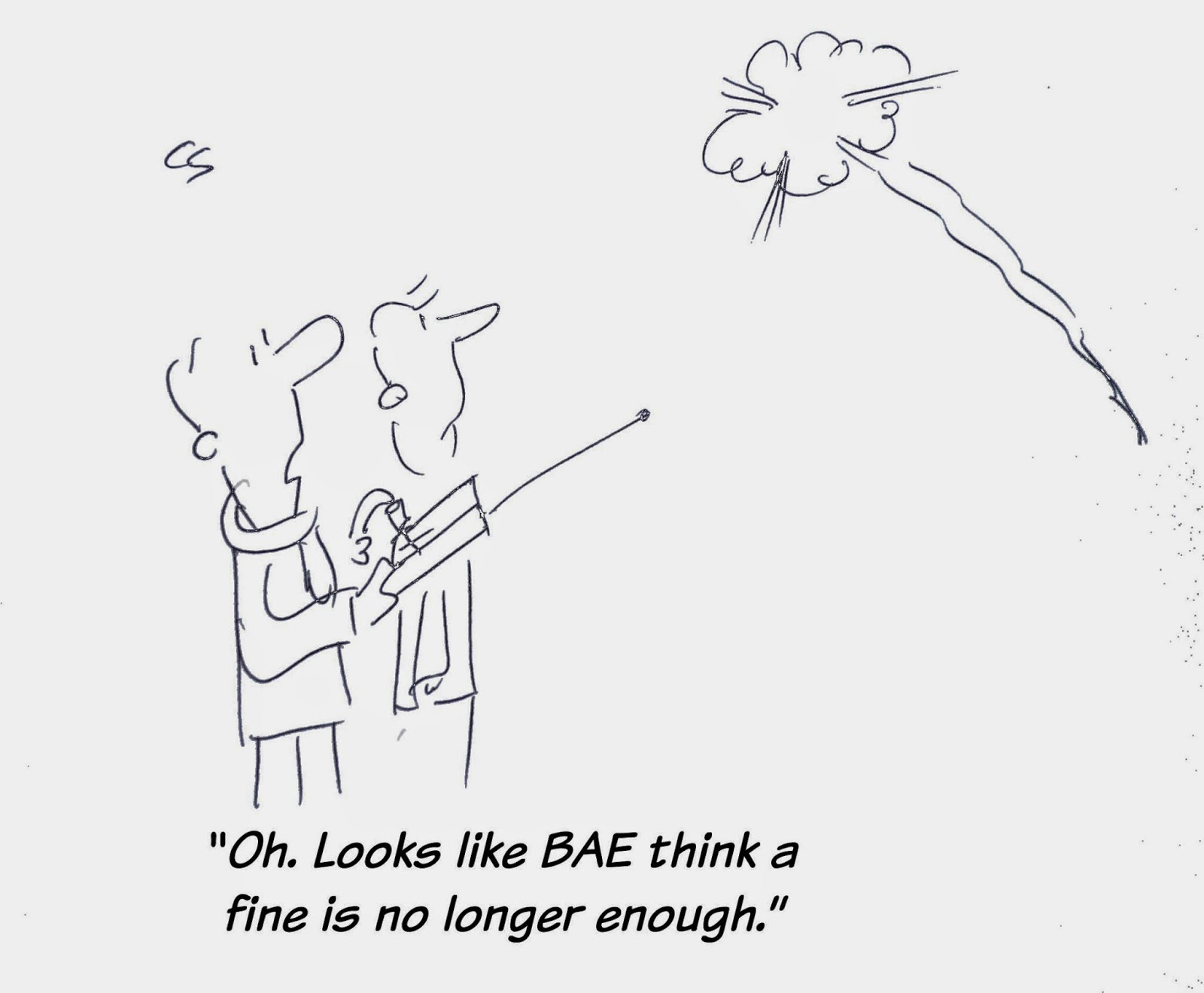 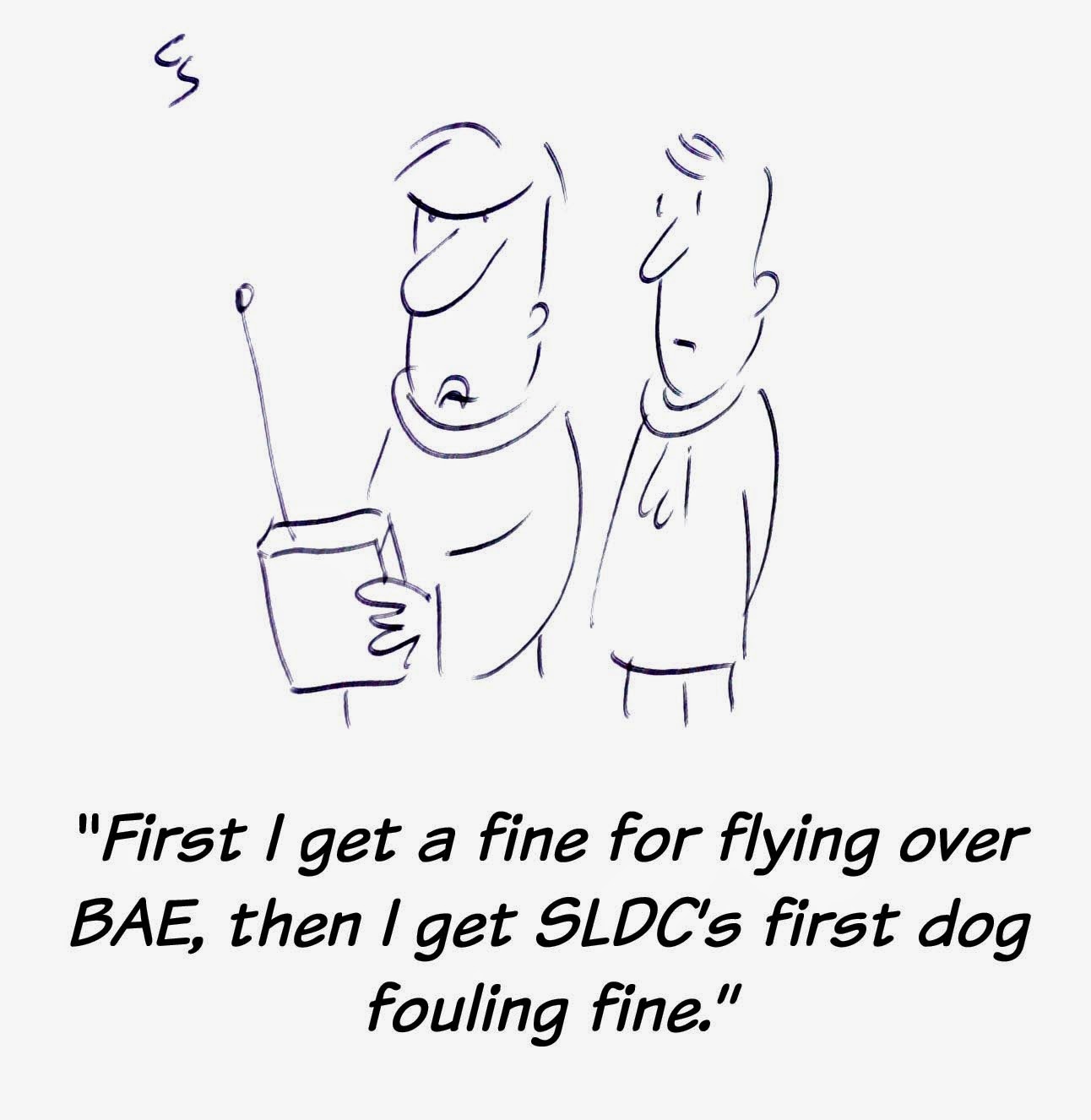