This week’s Westmorland Gazette front page threw up two stories of interest for the cartoon. In one, Cumbria County Council refuses to apologies for failing to grit enough roads during the recent snow fall. The other is a cracking story about a local farmer’s wife who reared two abandoned chicks in her oven.

Rough sketches below. If you aren’t too busy drooling over Apple’s latest iThingie or going mad filling in last minute tax returns, you can find which one got in the Gazette by buying the paper or visiting my website on Thursday morning. 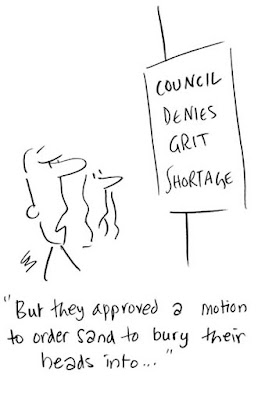 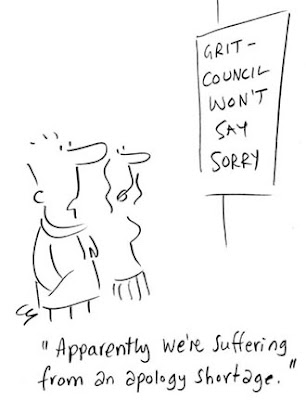 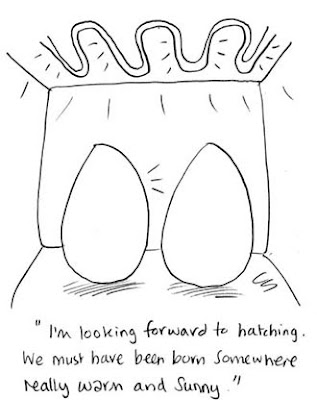 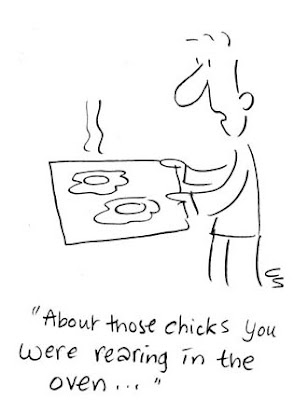 This week there were a couple of stories vying for front page of The Westmorland Gazette, so I had a go at both. The first sketch immediately demonstrated that I was about to veer into bad taste, so I concentrated on the second.

Ambleside has been without gas - and, for a brief period, electricity - as the thawing snow caused supply problems. A very local story but fun to do. I didn’t quite manage to stay within the bounds of good taste but I figure the odd dubious cartoon makes sure the editor is paying attention.

As you can see, the roughs are just that - very rough. They are 2B pencil sketches, rushed onto paper before the idea evaporates. I used to fuss about with the composition when it came to the final artwork but over the years realised I was making it worse. Somehow, doing the drawing without thinking too hard seems to work.

In this case, as you can see from the final cartoon, the layout did change slightly, to point up the water bursting from the cooker. And, as always, a final, final version appears in colour over on my website. 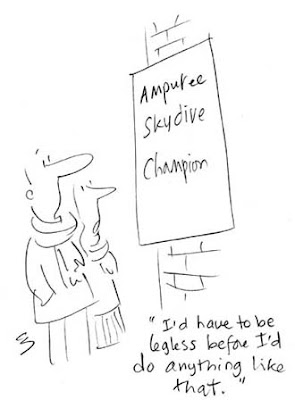 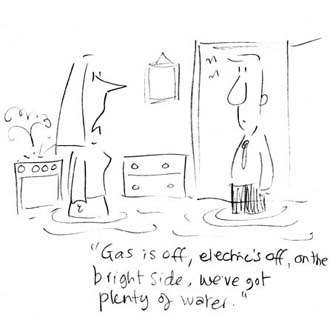 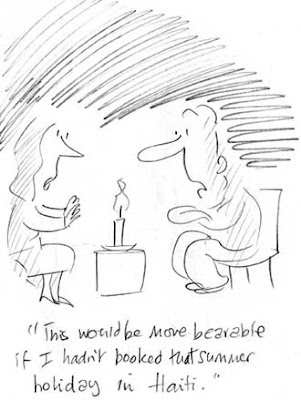 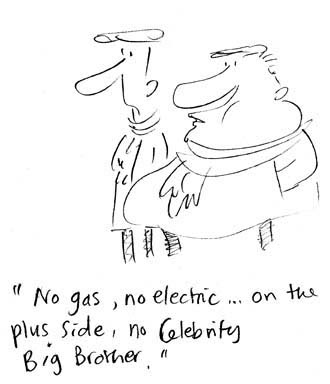 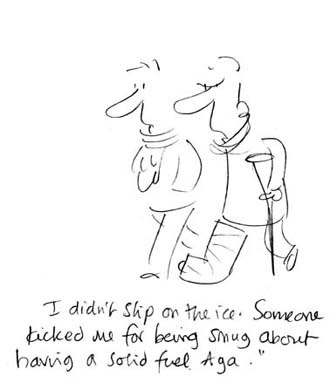 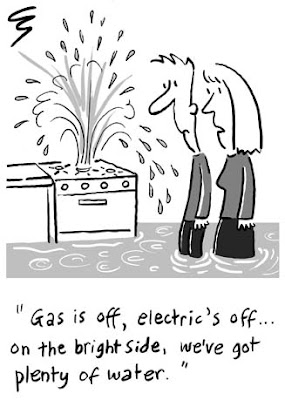 Now a thaw has begun - or new snow is due to arrive, depending on the forecast - this winter’s tale of British pluck and grit has shifted. But not far.

This is the problem with drawing a regular newspaper cartoon - sometimes the stories are too regular. They either hang around too long or come back too soon and you’ve got to come up with variations on a theme.

So here are mine. More pencil sketches from this week’s Westmorland Gazette cartoon. The final one will be in the newspaper and on my website Thursday morning. 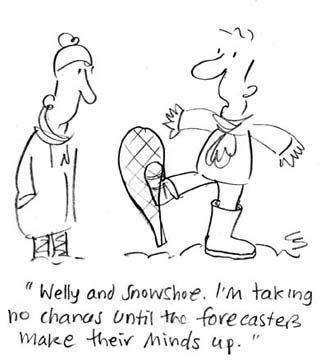 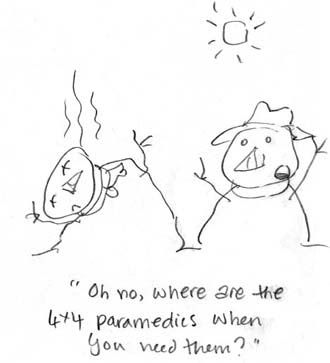 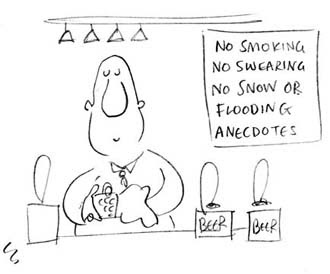 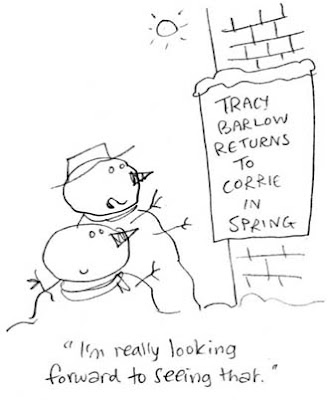 Whilst the rest of England dissolves into chaos (i.e. the South gets a few flakes of snow), Cumbria has had snow for nearly three weeks. Clear roads and pavements are a fond and distant memory and we’re now at the recrimination stage.

The Council has Held A Meeting to discuss whether to issue an apology for the lack of grit. Uncollected bin bags are piling up at the kerb (and we’re only allowed two per household, remember).

All of which is good news for cartoonists. Below are the four ideas submitted for this week’s Westmorland Gazette cartoon.

You can see the one chosen from Thursday morning, either on the front of the paper or on my website in glorious technicolor. 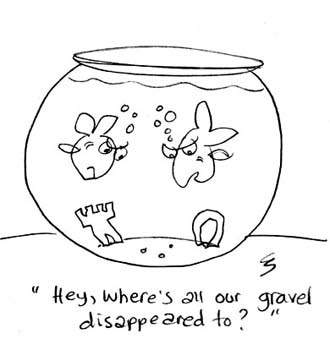 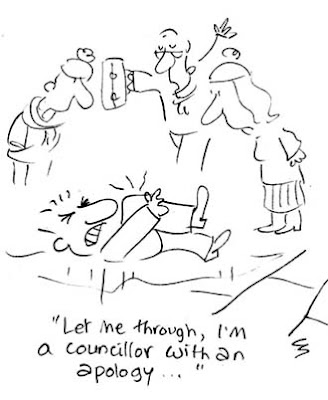 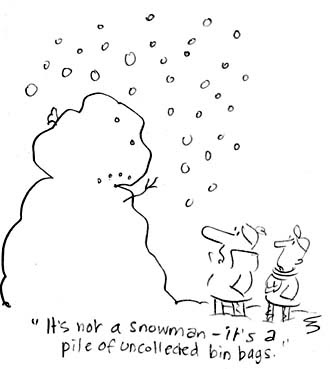 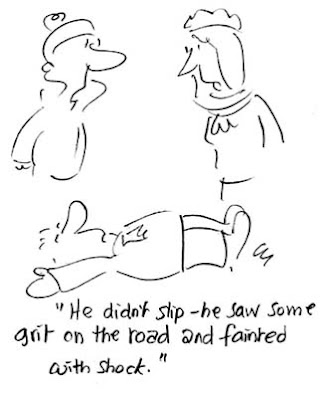 To celebrate the beginning of a new year I bought a new diary. This proved an intimidating purchase: My life is never going to be interesting enough to fill all the blank appointments, there are more pages for addresses than I have friends and there is an inordinate amount of space for New Year Resolutions.

It’s always a bad idea to keep your resolutions in full view. The new diary makes it worse by putting them into categories. What maniac has enough resolutions for each of the following: Physical, mental, self development, money, career, family, social, spiritual, emotional and property?

I can probably come up with something for one or two. Physical? That’s straightforward. I resolve not to run the London marathon again this year. Money? I resolve to win the Lottery. Career? Yup, I plan to get one of those any day now.

The spiritual one sounds pretty tricky. In fact, as a fully paid-up member of the Richard Dawkins fan club I really haven’t a clue what a spiritual resolution entails. Drink more Glenfiddich? Read more Will Eisner? Remortgage my soul? (I’ve already sold it once.)

I’m also intrigued by the idea of an emotional resolution. Does this mean I should resolve to be more or less emotional? Mr Spock was a bad influence on my formative years so I should probably resolve to have more emotions. But which ones? It’s not very relaxing for those around you if you start generating emotions at random. Today I am going to be mostly angst-ridden. It’s Tuesday so it must be ennui. Friday night is slightly anxious night. The diary could be more helpful here by prescribing which emotions to have and what days to have them. That would be more use than telling me the date Anzac Day falls on, especially when I’ve always assumed an Anzac is an ancient dyslexic South American.

On the whole, the new year will probably get off to a better start if I take the diary back to the shop and ask for a refund. I can survive without having my resolutions micro-managed.

Just to prove it I’ve already made a New Resolution. Not to make any New Year Resolutions.

That’s the first one broken.

Posted by Colin Shelbourn at 18:11 No comments: