Last week’s blog was all about news stories coming round again. Well, it happened again this week and bit me on the bum. Another story that I’ve tackled at least three times in the past and each time thought I’d given it my best shot.
Seems the Lake District is suffering a spate of sheep rustling at present. Rather odd as it's not the sort of goods you’d expect your average hardened criminal to target. Gathering them into the swag bag would be tricky, let alone fencing them afterwards.
It’s a topic which, although no fun for the farmer concerned, is pregnant with cartoon possibilities. Do the police have a flock squad? Do they put on a sheepskin and go undercover? Do they have underworld contacts to grass up the thieves?
I’ve done these and other cartoons on this subject over the years. Including the one in the title of this blog. (Turns out they really do bar code the sheep nowadays, so I should have patented that idea when I thought of it.)
So this week I was casting about, looking for a new angle. In the event, I came up with six (plus a token rude one to make sure the editor was paying attention). All of which meant that it got ver-r-r-r-y close to the 5.00 p.m. deadline before the final artwork went in via email.
The sketches are below and you can see the final, selected cartoon in the Westmorland Gazette tomorrow. Or over on my website. Don’t all flock at once. 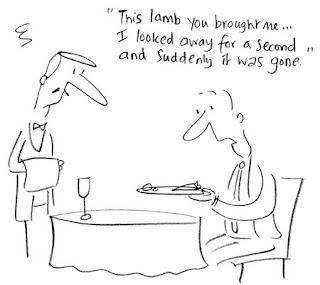 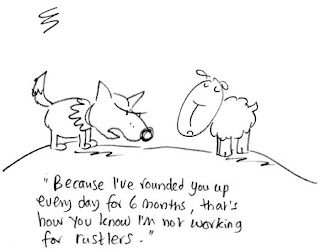 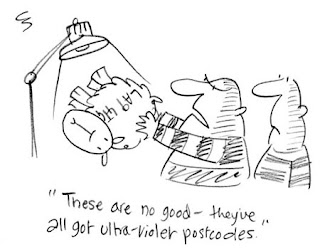 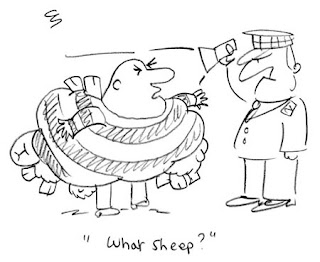 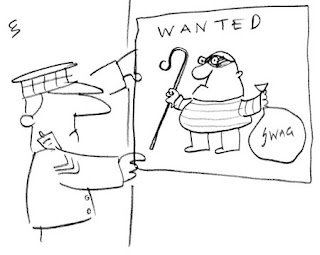 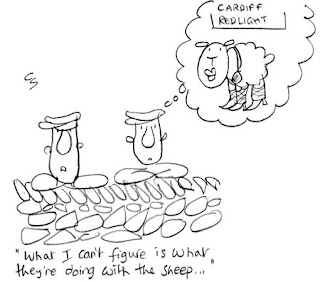 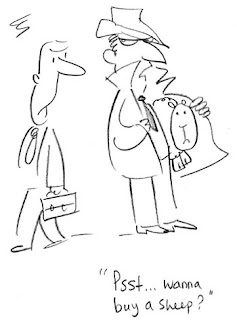 It could be argued (but not by me) that topical cartoonists on the national papers have it easy. One of the challenges of drawing a front page cartoon for a regional paper is repetition. Not repeating the same joke (although after 25 years that is a danger) but of encountering a story several times over.
This week it happened to me. Back in July 2002 there was a story in The Westmorland Gazette about South Lakeland District Council’s plan to close public toilets and save money. Not a brilliant idea for an area which derives income from tourism. But a good topic for a cartoon. I pitched several ideas and the one that got in struck a chord; numerous people have mentioned it to me since and even one or two councillors have admitting liking it. (The original is still for sale, by the way.) I thought it was my best shot at the story and you can see it at the foot of this blog.
When the story arose again this week, it was still a good cartoon topic but if I’d already done the best joke, what next?
Well, there were a couple of new angles. The planned closures meant it would be very hard to find an open loo. There was talk of it costing up to 30p to spend a penny. And plans for local communities to run the local bogs had interesting echos of David Cameron’s Big Society idea.
In the time available (I have about two hours) I didn’t quite get a handle on the community angle. Maybe I’ll catch that one next time round. Meanwhile, here are the ideas that did occur to me, including number 5 which didn’t even get as far as being presented to the editor. I was quite happy with the one chosen (which you can see on my website) although my favourite was number 1.
When the story returns in eight years, I’ll pitch that one again. 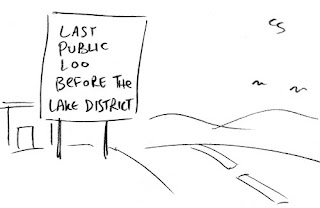 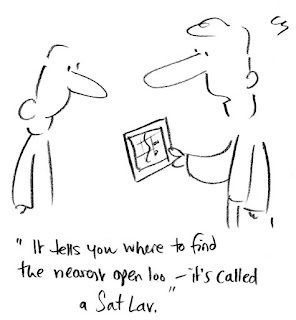 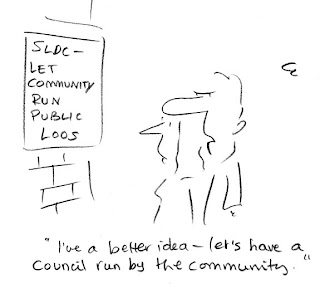 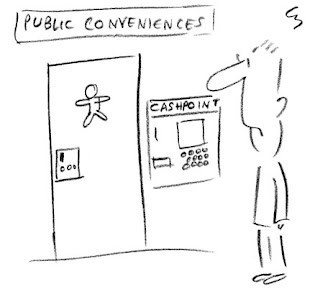 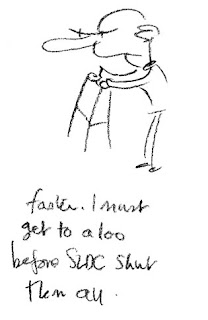 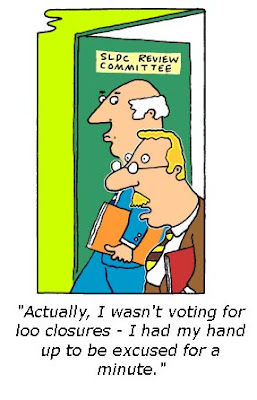 Posted by Colin Shelbourn at 10:54 No comments:

Who Was That Masked Man?

One of the candidates for this week’s Westmorland Gazette cartoon is a national story. A rare Roman mask - found near Appleby with the aid of a metal detector - is to go for auction at Christie's on 7 October and is expected to fetch between £300,000 and £500,000.
Tullie House Museum in Carlisle has launched an appeal to buy the mask and keep it in the county. Meanwhile, the mask itself is an interesting item. It is almost perfectly preserved and is of the type worn by ceremonial horsemen. The theory goes that they wore the mask to look intimidating and subdue the natives.
Enough of the history. It’s a good story though, as you can see from the sketches, it took me at least one go before I got a handle on it.
These are the (very) rough sketches I presented to the editor. You can see his choice on my website or by rushing out immediately and purchasing a copy of the newspaper. Feel free to write to the editor congratulating him on his choice and demanding the cartoonist gets a raise. 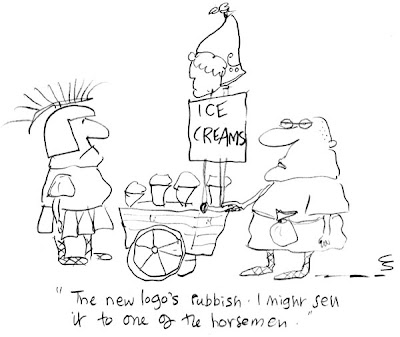 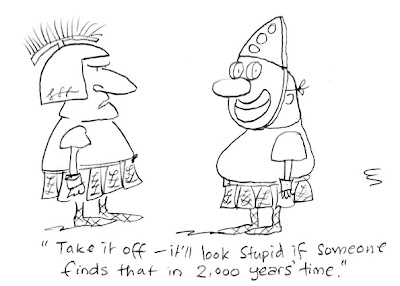 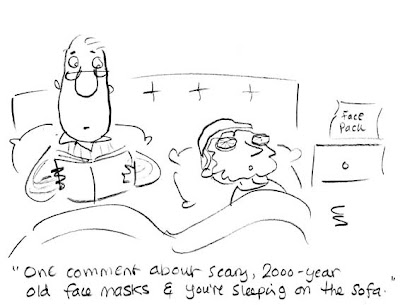 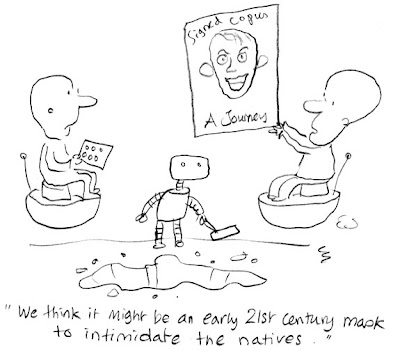 Posted by Colin Shelbourn at 10:36 No comments:

In at the Shallow End

This week the Westmorland Gazette had two cracking candidates for the front page cartoon.
The first involved the Great North Swim. This marathon event, which involves swimming the width of Windermere (the lake not the village), has been running for millions of years. Probably. This year 9,000 swimmers signed up to participate. Unfortunately, the lake has been suffering from toxic algae so, at the very last minute, the event was cancelled. Wailing and gnashing of Speedos all round.
Elsewhere, Tony Blair has been promoting his autobiography, The Journey. One gem to emerge is that he regrets the 2004 Hunting Act, having realised that fox hunting wasn’t the preserve of “a small clique of weirdo inbreds, delighting in cruelty” (his words, not mine - I couldn’t possibly comment). Cue strident calls for a repeal of the legislation.
I thought it rather sweet that this should cause Blair so much distress when he appears to more comfortable with other, slightly more controversial, decisions.
I submitted four cartoon sketches, which you can see below. One of them was deemed too political, which is a pity as it was my personal favourite. See if you can spot which of the other three met the editor’s approval. You can find out tomorrow if you were right by (a) buying The Westmorland Gazette, (b) visiting my website or (c) holding your computer upside down and scrolling to the answer at the foot of the screen. 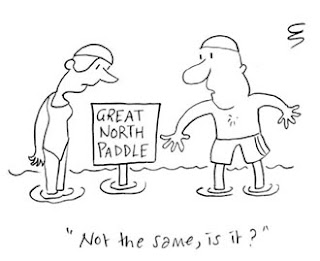 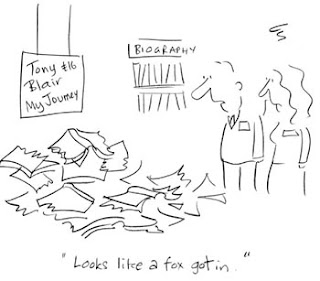 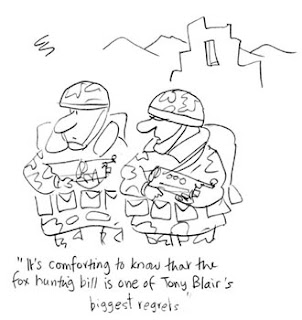 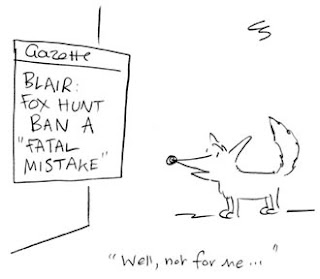