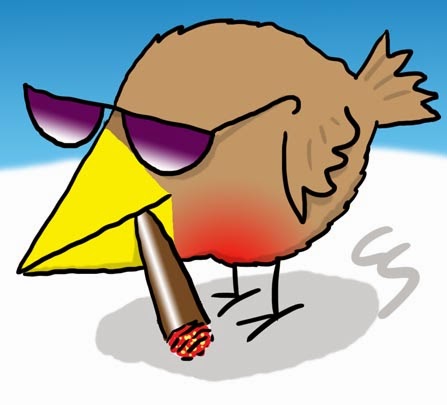 Last week Twitter was agog as party leader fan groups appeared. It began with the #Millifans, then some 13-year old swot started the #Cameronettes in retaliation. I never did hear if we got #Cleggers and #Faragoyles but it was all quite entertaining. A bit like the 1970s rivalry between the Bay City Roller and Osmond fans. (That's Donny not George.)

Away from the rarified depths of national politics, how are our local candidates doing on Twitter?

The LimDem’s Big Tim is a regular Tweeter. He’s been on since 2009 and currently has 25,443 followers. He often pops up to interact or tell people what he’s up to.

The Conservative’s Doctor Doctor (joined in 2014, 350 followers) is a bit sporadic. Her account name ends ‘2015'. A date in your Twitter handle is usually when you were born or an indication that the account is going to be thrown away at the end of the year. Guess which?

In 2010, the Tory candidate, Gareth McGareth, had two Twitter accounts. The first one was opened shortly after he was selected. It got 9 followers, then plunged into silence before a new one was opened. Who lost their password then? He hasn’t tweeted for 1,826 days so we can assume he finds his @votegareth handle less useful now.

The Labour (2011 and 193 followers) and Green (2014, 190) local candidates are moderately active, averaging a tweet a day. Green Chris has upped his rate recently, probably because it’s more ecological than showering locals with unwanted leaflets.

The local UKIPers don’t seem to have any Twitter account. Come on chaps, get a move on evolving those opposable thumbs.


Finally, 2015’s bookies’ favourite, The Apathy Party, has had a Twitter account since 2012 but only got 53 followers.

Don’t go following them; you’ll only frighten them into thinking they have to do some work.
Posted by Colin Shelbourn at 10:45 No comments:

The election is hotting up. All the parties have published their manifestos. The deadline for voter registrations has passed, leaving large numbers  of young people wondering why they get hit with tuition fees while more politically-active, older voters get all sorts of post-election benefits (do the math, chaps).

And the leafleting campaign has gone up a gear with a further ONE leaflet flooding through my letterbox. This time it’s from the cheery Labour candidate. Appearing in a Kremlin-style hat might not be politically astute but he’s trying hard, despite knowing he hasn’t a chance.

So it’s time to dig out the blog Swing-o-meter for in-depth political analysis in graphical form.

In previous years we’ve had the Tim-o-meter (2005, when all the candidates were called Tim) and then the Grin-o-Meter (2010 when global warming took a dip due to sunlight reflected from the candidates’ teeth).

This time we’re honouring Big Tim’s repeated claim to work his socks off for the area. We present … the Sock-o-Meter™. Or Footsie Index, if you prefer. 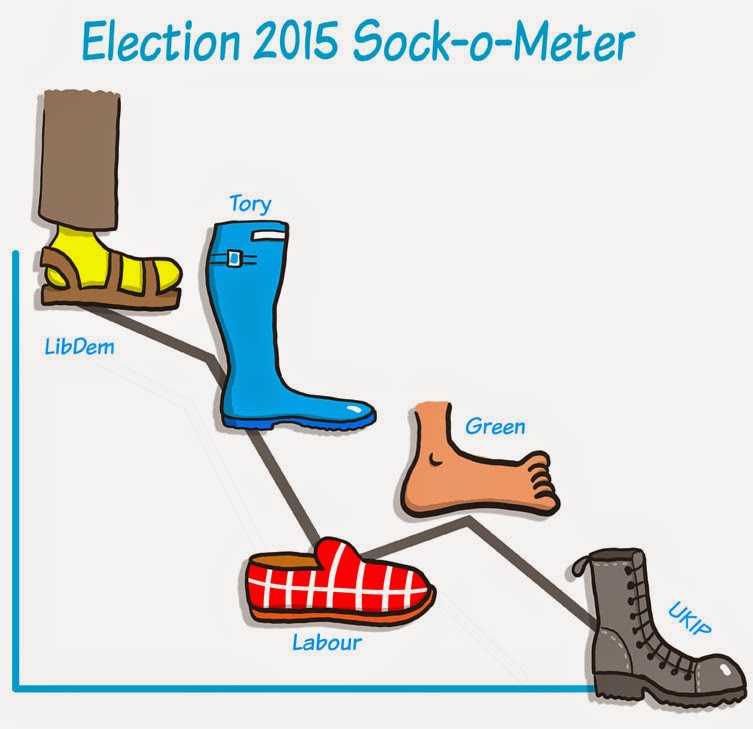 As you can see, LibDem’s Big Tim is still in the lead. The Conservative’s Doctor Doctor is doing well. Greens and Labour holding up. UKIP practically off the chart as well as beyond the pale. There’s everything to play for (unless you’re Labour, Green or UKIP, obviously).
We’ll be returning to the Sock-o-Meter throughout the campaign, adding extra refinements as necessary (assuming I can find the allen key).

On Friday we’ll look at some of the candidates’ claims in more detail. Join me then for the next exciting episode.
Posted by Colin Shelbourn at 12:00 No comments:

Spoilt Paper 3 - A Time of the Signs 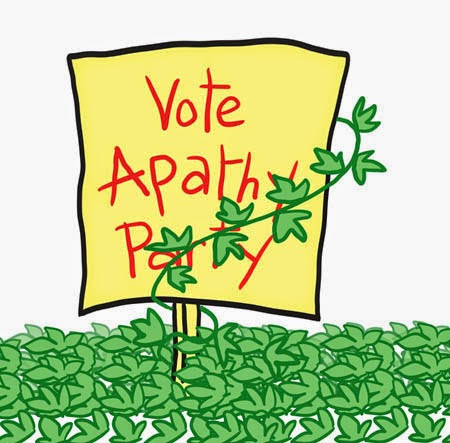 After the excitement of last week’s Westmorland and Lonsdale parliamentary hustings, it’s time for rigorous, in-depth analysis of how the candidates are doing.

As usual, unimpeachable methodology has been used to arrive at statistically-valid results, i.e. I drove round in my car for a bit and counted posters.

Here are the findings:

I almost missed three Tory posters as they were hiding in hedgerows and looked like estate agent signs. (And heaven knows we wouldn’t want to elect an estate agent; they tell porkies.) The three signs read “Conservatives: Securing Britain’s Future” and ironically enough they weren’t secured very well and were falling out the hedge.

The Tories are big in fields. The Doctor Doctor candidate’s smile is currently frightening livestock all over South Lakeland. LibDem signs are more often in front gardens, usually on the fence.

As far as I can tell, there are no UKIP signs anywhere - you just can’t get a decent Polish sign writer when you need one.

On Wednesday (or possibly Tuesday if I get enthusiastic) I’ll be introducing the updated 2015 blog swing-o-meter, the envy of broadcasters everywhere. I just have to figure out how to fit the batteries.

Posted by Colin Shelbourn at 16:14 No comments:

Last night was the highlight of the election campaign so far - the Westmorland Gazette live debate. It was held at Kendal College and chaired with steely resolve and Dimbleby-style discipline by Gazette editor Andrew Thomas.

It began extraordinarily well - drinks, nibbles and cakes for everyone attending. The drinks were served in blue glasses but in the interests of balance they swapped for them for red beakers half-way through.

For the five candidates, this was their 13th husting. At first I thought the table was aligned from left to right, politically speaking, but it turns out they were in alphabetical order. The Labour and UKIP candidates just happened to be at opposite ends.

The Gazette journalists were there in force and I was there in a nice jacket. It was my job to supply a sketches for the debate’s Twitter stream. (Any resemblance to candidates living or dead from the neck up is purely coincidental.) 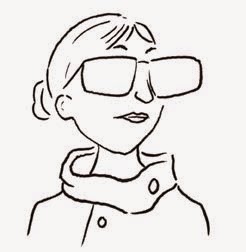 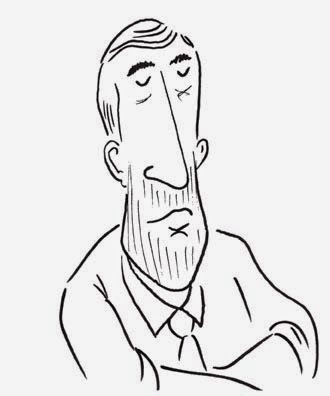 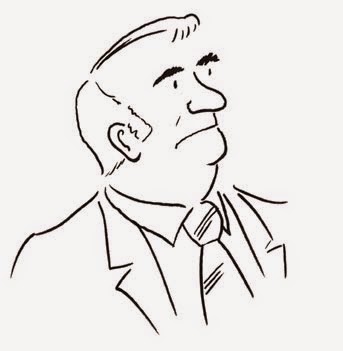 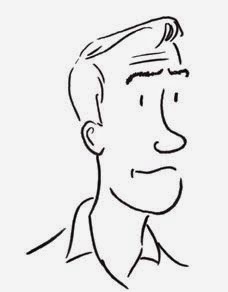 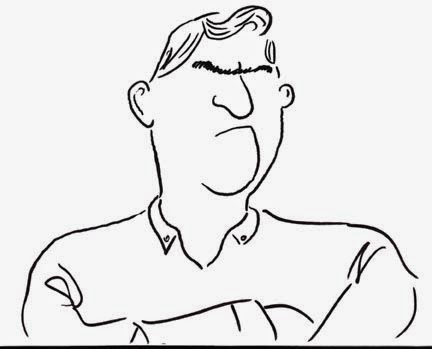 Live tweeting an event is hectic. Last night, for example, I was drawing the candidates, taking photos of the sketches to upload to Twitter, adding comments and dealing with hecklers from the back who were being rude about my drawings. In general, I was undertaking my responsibility to report the event in a fair and unbiased manner. (OK, I lied about that last bit.)

Over 90 minutes, the candidates tackled a wide range of questions. A lot were on subjects you’d expect and some of the answers were pretty predictable too (the UKIP chap managed to blame the EU for something on the 2nd question, winning me a bet with another journalist). The Green and Labour candidates were particularly impressive. LibDem Tim was, of course, the star as he’s used to the Big Boy’s Shouting Club in Westminster. It didn’t all go his way though.

Labour and Green - 2 each

UKIP - a round of boos (he’s a pub landlord) and a cry of “shame” and “disgraceful”. (It was a job to tell if this upset him as he looked pretty cross throughout the whole thing.)

You can still find the Tweets (look for the #WGdebate tag) and the live blog. Pop back here on Monday for an in-depth, scientific analysis of how the parties are really doing …
Posted by Colin Shelbourn at 15:00 No comments:

When David Cameron became PM in 2010, it became law that the election would be held every five years on May 7th. No more tedious speculation from the pundits before the date was announced. What we got instead were four months of campaigning that has plunged most of us into a coma. By May 7th it’ll be surprising if voter turnout hits double figures.

Closer to home, things have been more restrained.

A month ago, the Libdems sent me a jolly newsletter alerting me to the fact that my MP had done a Number of Good Things. Since then they’ve sent two more, plus a polite personal letter (not as polite as the ones my Nigerian bank manager sends).

To date, the Conservatives have managed to squeeze out one leaflet. The others have produced nothing. Presumably the dog ate them. Or perhaps the messy pile of leaves in my front porch is a subtle message from the Greens.

I’m not entirely sure who all the candidates are. I know the Tory is a smiley woman, which was a surprise; I’m not certain many local Tories know that women were allowed to vote. She seems to be a doctor because she has her photograph taken in front of Westmorland General rather a lot. Come to think of it, the LibDem's Big Tim is there so much he’s probably a qualified surgeon by now.

I do know that the original UKIP chap resigned - but then UKIP gets through candidates so fast it’ll soon have to start importing them.

It’s time I found out more. Who are they all? Do they have any policies? Do any of them have an original thought in their head?

Tonight at 7.15 I will confront them all personally at Kendal College. Not on my own (the blog isn’t that influential) but as part of an audience at the Westmorland Gazette debate. I’ll tweet my impressions (@colinshelbourn) and you can follow along via the #WGdebate hashtag.

In tomorrow’s blog, we’ll look at how the candidates performed.
Posted by Colin Shelbourn at 16:15 No comments:

By now I am sure most of you are consumed with election fever. I certainly am.

But it's even more exciting to discover that today is this blog's 10th birthday.

It all began with the election in 2005. Then editor of the Westmorland Gazette, Mike Glover, asked if I would like to do a blog about the forthcoming general election. "I know nothing of politics and hate politicians," I said. "Perfect," he replied, "the deadline is Friday."

10 years on and here we are again. My warped idea of election coverage kicks off on the Gazette site next Monday. Meanwhile, here is the very first blog:

The announcement of the election earlier this week came as a complete shock. I was convinced Tony Blair was teasing, getting the other parties excited and then putting the election off for a year. My excuse for being caught off guard is that I was still mourning the loss of a major world figure - namely Christopher Eccleston abandoning the role of Dr Who.

Some cartoonists are intensely political animals. They rage against politicians and are determined that their spindly drawings will change the world. It never works. Politicians enjoy the attention and the more you attack them the more they want to buy the original artwork. This is why so many cartoonists take to drink in their later years . I'm afraid I'm more a political legume than animal. My usual idea of political activism is defacing the candidate's photos in their election literature. But this election is going to be different. I've been lured by the promise of fame and glory into keeping an election weblog. This is a considerable blow - I was planning to hide the radio and unplug the tv for the next month but now I'm going to have to pay attention.

I began last night and at first it sounded promising; I caught the newsreader saying "we acknowledge and bewail our manifold sins and wickedness". At last, the Conservatives were making a clean start by atoning for the Thatcher years. But no, it turned out to be advance details of the royal wedding service.

Time for some insightful political analysis. Locally, it looks like being the battle of the Tims. So far, in my view, Tim Farron is winning. He's first off the printer's block with a glossy leaflet full of pictures showing him annoying a broad range of locals. Three days in and Tim Collins's cheery face has yet to thrust itself through my letterbox.

Turning to the Tim-o-Meter, Tim Farron is again in the lead: The last LibDem newsletter mentions his name 42 times, whereas Tim Collins's newsletter only managed to drop TC's name a paltry 34 times.

In the interest of balance, I have to tell you that there are two other parties campaigning locally but neither candidate is called Tim.
Posted by Colin Shelbourn at 14:53 No comments: