There were three stories for the cartoon in this week’s Westmorland Gazette. One of them was the lead - that’s always an attraction - although it was a subject I had tackled before and that’s usually a put-off. But this time it was a subject close to my heart, which I have railed against so many times, the Gazette banned me from tackling it for a while … holiday homes.
Or more precisely, the need to build new homes for locals. The two are the same. Despite what holiday home owners will tell you, the blight of second homes in the Lake District is resulting in closed schools, reduced facilities and fewer young people able to afford homes in the communities in which they grew up.
The Lake District National Park Authority has identified potential sites for 900 new homes in the area. Understandably, a lot of locals are opposed to all this building - the more so because so many houses remain empty for so much of the year.
Grr.
Anyway, I had four goes at the subject and sent them off to the editor. Esteemed editor came back and pointed out that they weren’t particularly funny, would I try again?
Grr squared.
I fired off a 5th. Then a 6th. And I’d actually got a 7th ready but by then I was seriously pushing the deadline and it was never sent. Fortunately, one of the cartoons had already been deemed suitable. Time to move onto the final artwork.
Which you can see on my website or in the newspaper from Thursday. Meanwhile, I leave you with the preliminary sketches … 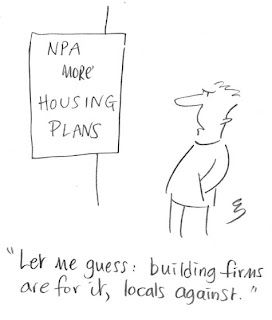 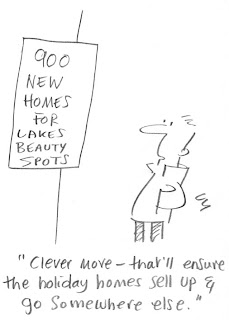 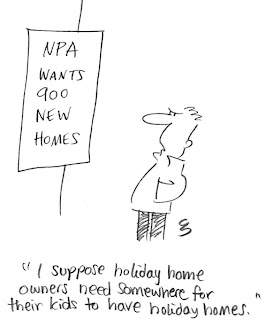 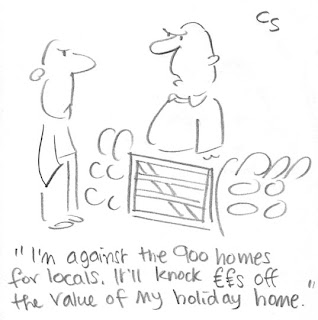 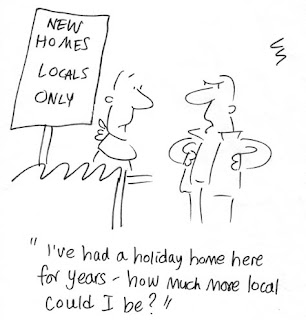 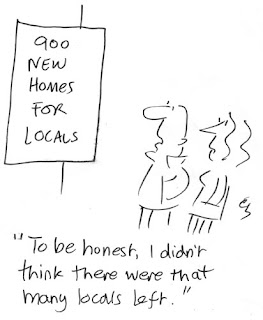 Cumbria is full of strange and exotic creatures.
Red deer, ospreys, char, golden eagles, Bownessie, ostritches, tigers, giraffes, even the occasional cartoonist. Many of these exotic animals (not the cartoonist) live at South Lakes Wild Animal Park, which has plans to expand to include even more exotic animls (still no cartoonists).
Local councillors have other ideas, however, and there is something of a stand-off occurring at present. Two sides to a conflict, each with a voluble spokesperson - an ideal lead for any newspaper.
The other story which whiffled past the cartoonist this week, is one which is bound to create controversy. Emma Thompson, actress and daughter of the narrator of Magic Roundabout, is writing a sequel to Beatrix Potter’s Peter Rabbit, set in Scotland.
I had a few ideas what this might be like, most of which were judged unsuitable for a family newspaper. Fortunately we’re made of more robust stuff here, so you can see the ideas sketched out below. To discover which cartoon is on the front of this week’s Westmorland Gazette, buy the paper or waft over to my website from Thursday morning. In case you were hoping, it isn’t number one … 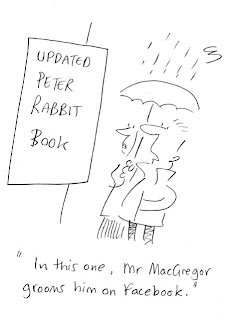 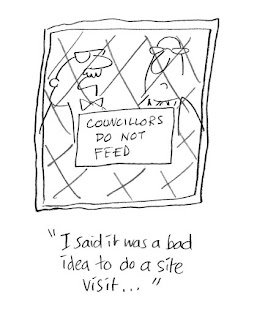 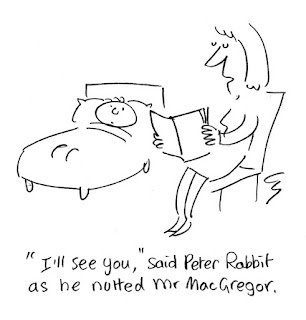 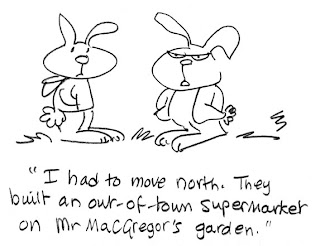 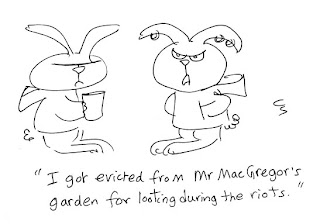 The cold winds of change are tugging at political skirts around Cumbria at the moment.
The Parliamentary Commission on Boundary Changes, Gerrymandering and Fiddling Round the Edges has recommended that Cumbria’s political boundaries be randomly hacked about in order to generate correspondence and boost sales of local newspapers.
And I think it may work. Residents of Hawkshead and Windermere, for instance, who have hitherto been content to share their MP with the fine folk of Kendal will be more than a little dischuffed to discover they’ve got to share one with the lower class oiks from St Bees and the west coast. They’ll be reaching for the headed notepaper in droves. But they’ll be out of luck. Droves is now lumped in with Carlisle and Penrith.
As it is a cartoonist’s task to get outraged before the readers, the target for this week’s newspaper cartoon was clear.
But lo, there was a second story worthy of attention. Kendal is suffering declining air quality. For once, this was not caused by the thick fumes which belch forth from the dozens of mint cake factories on the outskirts of town. It is caused by traffic. And probably traffic at a standstill; in addition to high concentrations of nitrogen and carbon monoxide particles, tears of frustration were found in the dense smog.
Here are the four ideas I submitted to my editor this week. As usual, you can find out which was the lucky winner of the Caribean cruise by shimmying over to my website. 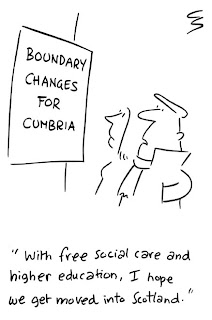 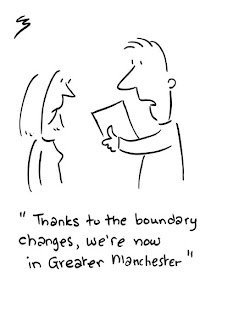 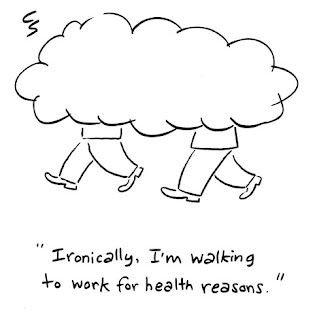 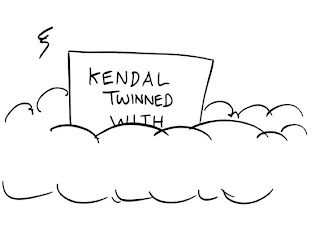 We’ve all done it.

We’ve picked up the remote control, fiddled around and pressed the wrong button.

Before we know it, the video has turned off halfway through a recording, the neighbour’s garage door has opened or we’ve launched a major air-sea search-and-rescue incident.

This is exactly what happened to a gentleman on Ullswater last week. He was on his boat, demonstrating his radio to his grandchildren. Unfortunately he pressed the Mayday button and sent a signal to Liverpool coast guards.

They in turn triggered rescue boats from Ullswater Outward Bound Centre, a nine man team from Patterdale Mountain Rescue and crews aboard the Ullswater Steamers.

The man was eventually found, three hours later, at a local marina, blissfully unaware of the havoc he’d caused and, probably by this stage, introducing his grandkids to the delights of Werther’s Originals.

The leader of the Mountain Rescue Team commented, with commendable restraint: “I wouldn’t implore his intention of checking his equipment although I would query how well he actually did it.”

This, clearly, is ideal stuff for a newspaper cartoon. Below you can see the pencil sketches submitted to the editor. It’s really one idea plus four variations; it sort of grew on me.

To see which one adorns the front of Thursday’s Westmorland Gazette, rush over to my website urgently! 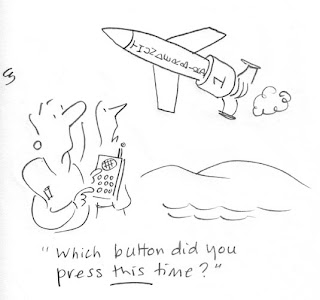 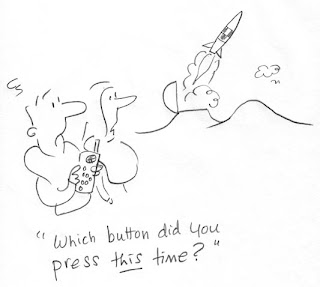 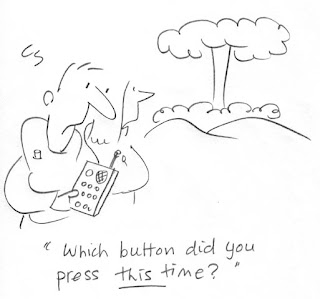 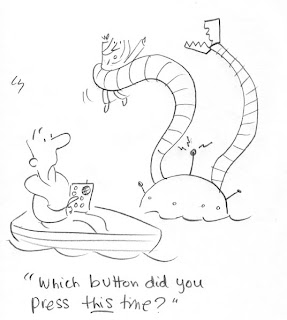 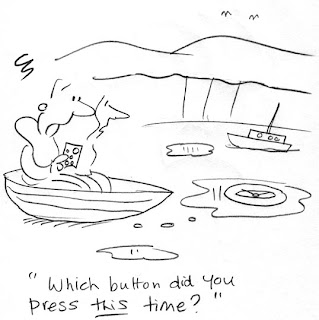 Posted by Colin Shelbourn at 07:44 No comments: